The Jacksonville Jaguars are coming off a horrid campaign. They were an NFL-worst 1-15, winning their season opener against the Indianapolis Colts and then losing 15 games in a row. That’s led to massive changes in the Jaguars structure. College football legend Urban Meyer is in as head coach. It’s almost a lock that the Jags will utilize the first overall pick of the 2021 NFL Draft to select Clemson Tigers quarterback Trevor Lawrence.

If you believe in omens, the turnaround in Jacksonville could prove to be both rapid and dramatic. Previously, after two of the worst seasons in franchise history, the Jaguars rebounded not only to post a winning campaign, but to also qualify for the postseason and each time, come within a win of going to the Super Bowl.

Should you believe in the third-time lucky theory, then perhaps you’ll want to place a wager on Jacksonville doing something big this season. You could bet a prop on the Jags earning more victories than their projected win total. Or maybe get some action on Jacksonville qualifying for the playoffs. And if either of these options are something you have in mind, now’s the time to join up with an online sportsbook and take advantage of the betting bonus that they offer to new players. 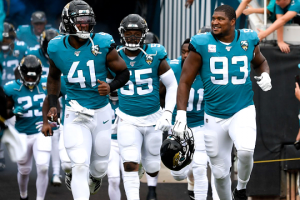 “The Jacksonville Jaguars” by Douglas DeFelice is licensed under CC BY 3.0

The Jags were officially born in 1995 as an NFL expansion franchise. And as is often the case with a first-year team, it was a campaign filled with struggles. They lost their first four games and seven in a row in the second half of the season to finish 4-12.

There certainly weren’t a lot of early indications that the sophomore season of NFL football in Jacksonville would end any differently. The Jaguars opened 1-3 and were 2-6 at midseason.

Then something magical happened. Jacksonville rattled off five wins in six games. A victory in the regular-season finale over the Atlanta Falcons would put the Jags into the postseason. Jacksonville was leading 19-17 when Atlanta’s Morten Andersen, one of most reliable kickers in NFL history, trotted on the field to try a 30-yard field goal to win the game.

Andersen slipped as he approached the ball and it sliced wide right. Jacksonville was going to the playoffs.
That alone would’ve been enough to fulfill an impressive campaign for the second-year club. However, there would be more miracles in store. Jacksonville traveled to Buffalo to face the Bills in the AFC Wild Card round. Natrone Means rushed for 175 yards and Mike Hollis kicked the game-winning field goal late in the fourth quarter. Jacksonville’s 30-27 victory marked the first time that Buffalo had lost a home playoff game.

Next up were John Elway and the 13-3 Denver Broncos. The Broncos were 14-point favorites and quickly opened a 12-0 lead. The pesky Jags rallied for a 13-12 halftime advantage. Means rambled for 140 yards and Mark Brunell hit Jimmy Smith for the winning TD with 3:49 left in the fourth quarter of another 30-27 Jags victory.
Jacksonville was heading to New England to pace the Patriots in the AFC Championship Game. The Jags were out of miracles, though. They turned the ball over four times and lost 20-6.

Late in the 2016 campaign, en route to a 3-13 finish, the Jaguars replaced head coach Gus Bradley with Doug Marrone. As with 1996, the 2017 season didn’t start out impressively. Jacksonville opened 3-3. Next came a four-game winning streak and seven wins in eight games.

Finishing 10-6, the Jags were AFC South champions and in the postseason for the first time in a decade.
A familiar foe awaited them in the AFC Wild Card round. Jacksonville defeated the Bills 10-3. Then they went to Pittsburgh and stunned the Steelers 45-42.

More familiarity. Another AFC Championship Game at New England. The Jags were leading, but surrendered two fourth-quarter TDs and lost 24-20. 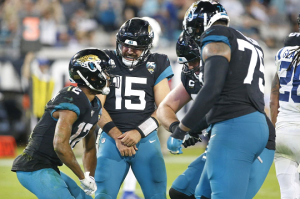 “Jacksonville Jaguars” by Reinhold Matay is licensed under CC BY 3.0

The second-worst season in Jags history was when they went 2-14 in 2012. That time, there was no turnaround in the cards. Under new coach Bradley, they went 4-12 in 2013.
So, this formula doesn’t always work out for Jacksonville. But as Meat Loaf once suggested in song, two out of three ain’t bad.