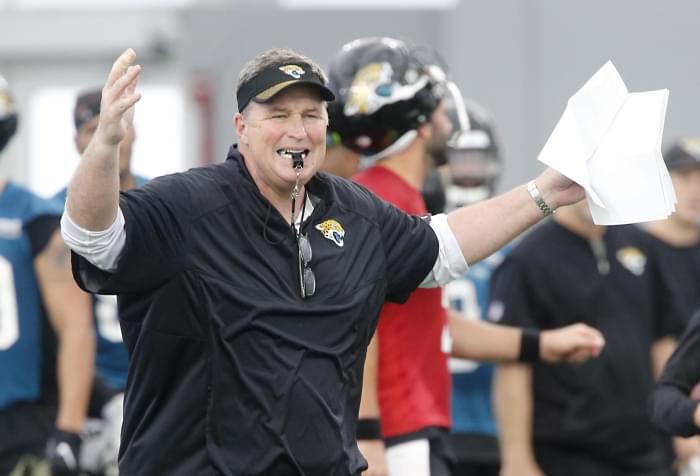 Jaguars coach Doug Marrone is ready to get nuts.

Marrone remains tasked with turning the Jaguars around. The team is 1-6, losers of its last six games with the hardest part of the schedule yet to come.

Marrone has this week to reflect and enact massive changes as the Jaguars enjoy their bye.

Marrone, 9-26 in his last 35 games, is clearly in danger of being fired. He sounded like a coach who knows he’s out of mulligans in a fascinating press conference on Tuesday.

Here’s Doug in all his (desperate?) glory:

“I’m not going to bullsh@t anyone, I’m kind of fired up. And I know you guys are probably sitting like, ‘What the hell’s going on? How can this guy be fired up? They just lost six games in a row,’ and I understand that. I totally do but I’m going to bust my ass, I mean I’m telling you now. I’m going to look at some things, I want to go a little bit outside the box. I want to challenge these coaches and challenge these players and see [what they can do]. I’m going to do whatever can to get the best out of this team and best out of these players. I’m sure people are going to mock me for that or say whatever the hell they want, but I really don’t give a sh@t. I’m fired up. I’m going to go after it and however it falls, it falls, but it’s open for me. I’ve done crazy sh@t before. A lot of people don’t know, we changed an offense four or five days prior to the opening of our season in Syracuse my last year. We just went in a whole different direction and, sh@t, it worked out. We took chances on some guys. We took a chance on a guy named James Robinson and he’s playing his ass off. So, I’m kind of fired up, man. Let’s go.”

So here are my suggestions for Marrone as he ventures into “Crazy Sh@t” Territory. Some are serious and some tongue-in-cheek. I’ll let you decide which is which.

*Keep sending 12 men on the field

Why: Hey, they won’t always call it.

*Defer and then on-side kick

Why: Attempts to steal a possession should begin immediately at the start of every game.

Why: He can’t be tackled.

Why: He’d be the best athlete and toughest of the current group.

Why: Go up tempo. Make it a playground game.

*Have Minshew call his own game

Why: If he’s this football genius then let him run the entire show.

Why: The underdog should always do this and the Jaguars will be the underdog in every remaining game.

Why: JR2K is one of the most physical players on the team.

Why: He’s a reserve player. Stop giving him the 64 percent of all snaps he has now. Bryan is the lone Jaguars defensive lineman to log over 260 snaps. He has 314. I’d rather see more DaVon Hamilton and Doug Costin.

*Always go for it on fourth-and-3 or less

Why: Any punt is going to result in points for the opponent. So, you might as well try to keep possessions alive by gambling more on fourth down when its short yardage.

Why: The Jaguars defense isn’t going to stop anybody. They’ve allowed at least 30 points in the last six games. Create havoc and play to your talent better by shifting to more 3-4 looks.

*Give a trio of rookies more work

Why: I want to see what receiver Collin Johnson, linebacker Shaq Quarterman and safety Daniel Thomas can do. They should be taking snaps away from Chris Conley, Joe Schobert and Josh Jones.

Why: Doug, you used to be awesome at this. What happened? Fake a punt every game.

Why: The opponent will have to prepare for three quarterbacks: Minshew, Viska and Luton. I’m ready to see what the rookie, who dazzled in training camp, can do in a limited role.

So, which ones are real and which are jokes?