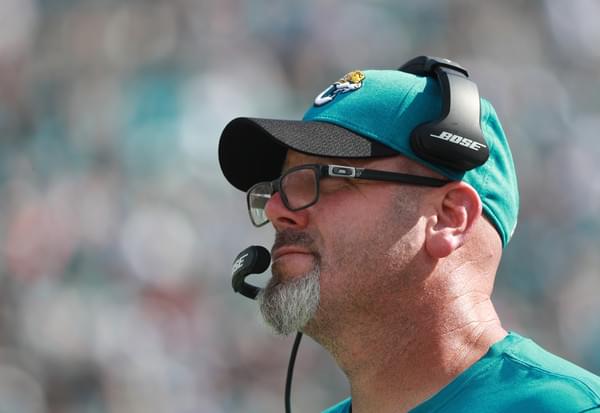 The Jaguars aren’t finding a defense this season.

Nothing can solve this.

Sure, Jaguars defensive coordinator Todd Wash should be fired.

But we also know Jaguars coach Doug Marrone won’t do that.

He didn’t do it two years ago when the Jaguars lost at Dallas 40-7 in Week 6 of the 2018 season and he isn’t going to do it now. That day, the Jaguars gave up three touchdowns and a field goal on Dallas’ first four possessions.

Firing Wash wouldn’t help matters anyway. The 2018 unit might have responded to a new voice. There were sensible in-house replacements on that staff. That doesn’t exist now.

The Jaguars defense is hopeless.

That was evident after another opponent, this time lowly Miami, scored touchdowns on its first three possessions in a 31-13 embarrassment on national TV for the Jaguars on Thursday night at TIAA Bank Field.

The previously-winless Dolphins had 17 first downs before the Jaguars ran their 14th play of the game.

The biggest hits I saw came at halftime when the Jaguars played clips from an old AEW match on the videoboards.

Maybe Chris Jericho can play linebacker. Or safety. Or corner.

He couldn’t look more hapless than middle linebacker Joe Schobert did in totally whiffing on 37-year old Miami quarterback Ryan Fitzpatrick on a 13-yard run on third-and-4. Hey, at least the Jaguars held Fitzpatrick to 18-of-20 passing.

Maybe Jericho can play defensive tackle. He has one fewer tackle this season than Taven Bryan. Yes, Taven Bryan, you know the guy they all rave about, has one tackle in three games.

The same putrid situation played itself out again for the third consecutive game. The Jaguars kickoff and the opponent goes right down the field and scores a touchdown.

The Colts did it and never faced a third down.

The Titans did it and never faced a third down. They scored touchdowns on their first two drives.

The Dolphins did it on their first three, opening the game with a 12-play, 84-yard march that took 6:51 off the clock and damaged the mojo in the building and on the Jaguars sideline.

The problem with Wash is that he can’t anticipate what his adversary will do. He has to see something and then react. By that point, the opponent is on the scoreboard.

The embarrassment of talent the Jaguars had on defense in 2017 covered for him, but now he’s getting exposed like he has really for the last three seasons counting this one.

No coordinator could take what Wash has to work with now and field a top-10 defense. However, it should never be this dreadful.

Marrone is so sick of it and out of answers (and possibly confidence in Wash) that he strongly suggested that moving forward he’ll elect to take the ball first. That’s how bad this defense is when the head coach has to go against one of his basic philosophical principles (you should always defer) to try and find a solution.

The Jaguars have allowed 35 points in the first quarter this season in three games. The 2013 Jaguars, the least talented team this franchise has ever fielded, allowed 107 first-quarter points that season. This defense is on pace to allow 186 first-quarter points.

The offense stunk Thursday night too, but I can’t blame them for being shellshocked at staring at another double-digit deficit minutes into the game.

The Jaguars have an offense they can win with this season. One bad performance doesn’t change my mind about that.

The defense can’t win. Not enough. Not like this.

If the Dolphins can come here on a short week and execute like this, there’s no reason to believe the defense will get significantly better.

The glittering former football metropolis known as “Sacksonville” is now a one-traffic-light town.

Get ready to watch 13 more displays of pathetic defense.

There’s no fixing this.