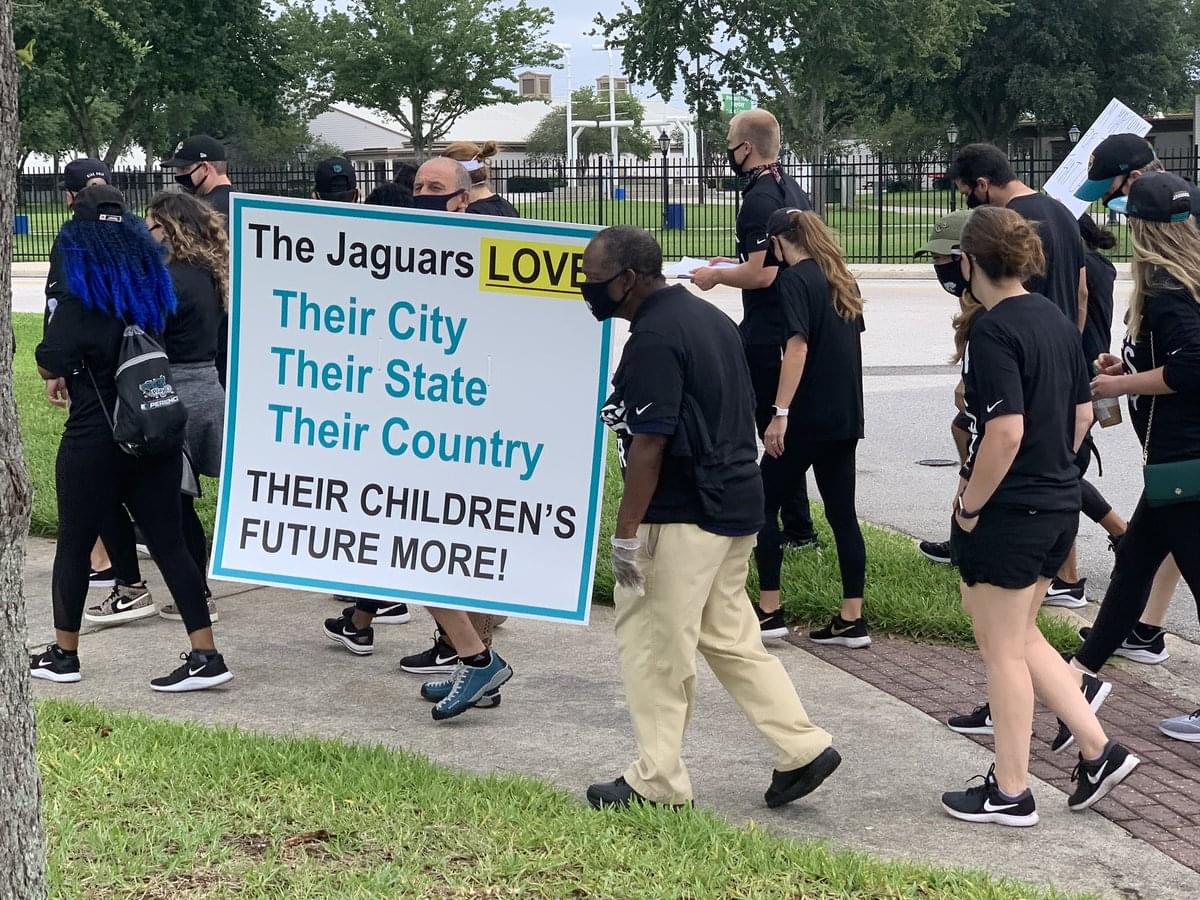 Last Friday, I had the honor of covering the Jaguars very well-organized Black Lives Matter march from the stadium to the JSO headquarters on Bay Street. It was touching, moving, vitally important.

But I think what hit me the most is that, moments into it, as we left the stadium, walked along the practice fields, then alongside the baseball stadium to Bay Street, took a right and headed to JSO, if you were there you felt like you were part of it. It was as if you had been invited to take part in a very special moment, one you will remember for a lifetime.

I can’t claim to be part of it — that would be disingenuous. I was there to do live reports on 1010XL. But I sure felt like part of it, just the sincerity of it all. This wasn’t grandstanding, as protest marches can be at times. This wasn’t a narcissistic moment for those involved. This was real people, sharing real pain, passionately, respectfully, unloading the struggles of their heart.

Marcus Pollard technically is the Jaguars director of player development and youth football. But what he really is: one of the best people you’ll ever know. Funny, down to earth, respected by everyone in that building. He was a tight end in the NFL for 14 years, mostly with the Colts, and is most known for catching all those passes from Peyton Manning. But deftly emceeing this event was one of his finest moments.

Running backs coach Terry Robiskie was moved to tears while speaking at the JSO. The words of receiver Chris Conley, speaking on the JSO steps, were as real, personal, impactful as those in any speech I’ve ever heard or witnessed.

Former Jaguar receiver Ernest Wilford, now a police officer with JSO, was there in uniform. Other uniformed members of JSO were there as well to help and show support, but stayed in the background so as not to distract. Everyone present handled their roles beautifully.

Coach Doug Marrone spoke after the walk returned to the stadium. He was terrific. And his role could not have been more important — it was the coach, who after listening to his players early in the week, decided they had to do something. And the march was born from that moment.

I know these are stressful times in our world. The coronavirus still has people fearful, worried, uncertain. The deaths of George Floyd and Ahmaud Arbery and so many before them were so unjust. And because everything nowadays is on video, just viewing those awful moments turns your stomach.

But I sure appreciated that hour or so last Friday morning. It wasn’t angry, but it was passionate. It was respectful. It was important. Man was it impactful.

My take from all of this is not that people of color are suggesting that others are all racist. Those who have spoken are just respectfully asking that others listen, really listen. That they try and understand the difficulties at times of being black in America.

And I think people are listening. Maybe more intently than they ever have.

I was really saddened to hear about the sudden death last night of former Florida receiver Reche Caldwell, who was just 41. According to TMZ Sports, Caldwell was shot and killed outside of his home by men trying to rob him. It just continues the sadness of the times.

Caldwell played six years in the NFL after being drafted in the second round of the NFL Draft in 2002. He never really made an impact in the league. But I will always remember those years at Florida, particularly his last one. I think Rex Grossman passing to Caldwell and Jabar Gaffney in 2001 was one of the greatest combinations in college football history that never really gets its due. That team was one of the greatest in school history and was a joy to watch. …

Hey MLB, just so you know, I’m now good with you not playing. Take the year off if you want, I really don’t care. Golf begins this week, the NBA and NHL have solid plans in place, college football is right around the corner, NFL teams will be in camp in a little over a month. We’ve made it through the dearth of sports to watch and we’re doing just fine.

If you shock the world and decide to finally get along and play, that’s fine. I’ll watch — I’m not going to lie and say I won’t. I’m a diehard Pittsburgh Pirates fan; the broadcast team, led by my buddy Greg Brown, is fantastic, and I just love watching.

But I’m no longer glued to every word I can read or hear about whether the league and the players union can get along. I’ve read enough. You guys don’t like either other and don’t trust each other. I get it. Then get on with the divorce already. I really don’t care. Frankly, we’re all tired of all the crap.

Don’t get me wrong, I still love the sport. I’ll support college and high school baseball, will support the Jumbo Shrimp when they come back next year here in town. I’ll watch MLB games next year if you guys have it figured out by then. I’ll probably make my annual trek to spring training.

We will continue to build Walk Off Charities, helping children in under served communities play a game that has become all too suburban. That feels more important than ever right now.

I’m just done wondering about Major League Baseball this year. I’ve spent enough energy following it. If you guys decide to play, great. If not, that’s fine, too. Who cares? And if I feel that way, can you imagine how the casual fans feel? …

The wife and I just spent five days in a mountain cabin in Blue Ridge, Ga. I highly recommend it. Weather was fantastic, the mountains and streams and views are just magnificent. Try it out. …

While there I lost in pool because I scratched on the 8 ball. Which is a dumb rule. But I freaking dominated in air hockey. Just so you know. …

With the city and state opening up and allowing restaurants and bars to be closer to full capacity, we’re taking the show back out on the road, starting this week. We have tons of live remotes scheduled, starting with this Wednesday at Brucci’s Pizza on Hodges Blvd. near Beach Blvd.

We’re going to have giveaways, a putting contest with cash and other prizes. So come hang out with us — it’s been too long. We’ll stick around after, have some pizza, maybe a beverage or two. Hope to see you. …

Newest addition: Zac Brown Band’s “As she’s walking away.” The harmony in it is tremendous. Thank me later. …

Vacation getaway, lots of hours in the car, tons of rain meaning lots of time inside. End result: Lots of time with the wife.

Me: So are you bummed that vacation is over and I’m headed back to work?
The Wife: