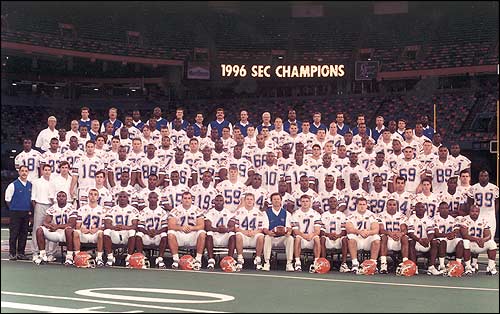 Mike Peterson was a star linebacker at the University of Florida from 1995-1998 taking home First-Team All-American honors in 1998.

During the 1996 season, Peterson was a sophomore, but had already established himself as one of the key elements on a defense that would help Florida win its first national title in program history.

Peterson joined “XL Primetime” on 1010XL to look back on that season.

I think one of the top things that sticks out to me was how competitive we were amongst ourselves,” Peterson said. “Not only the offense against the defense, but among the different groups. We were competing amongst ourselves and competition against the group always brings out the best in you.

“That’s what we had with that team, practice was actually harder than the game during those times. When you went out to practice you didn’t want to get embarrassed. I think that competitive edge that we had in the locker room, a lot of that trickled down from the head coach.

Peterson told a story about Florida hiring Bob Stoops as defensive coordinator prior to the 1996 season, he says it was a great partnership almost instantly.

“That was huge because Coach Stoops came in after the Nebraska game to end the 1995 season and his first meeting was us watching the game tape from that game,” Peterson recalled. “His demeanor, the way he coached, everything about him, we gained everything we needed to know about Coach Stoops from that one meeting. The rest was history man, it was a great match. His mentality with the style of defense we wanted to play, it was a perfect match.”

Peterson was asked even now, 25 seasons later, what he thinks about when remembering the Florida-Florida State rematch in the 1997 Sugar Bowl

“A big smile comes to my face,” Peterson said. “The things I enjoyed about that the most was one, the preparation. After what happened earlier on in the year and us preparing, feeling so confident and being so anxious and being ready to go. Then the outcome of that with the celebration and the party on the field with the pictures, being the first team to win a title for the Gator Nation. Those are really the two memories that stick out, the preparation leading up to it and then the reward at the end.”

Peterson has now jumped from a player to the coaching ranks and is a member of the coaching staff under Will Muschamp at South Carolina.

Peterson was asked what led him to get involved coaching college athletes.

“It started maybe when I was in Jacksonville,” Peterson said. “It started early just thinking about it and seeing the coaches, in fact Coach Mike Smith (Jaguars defensive coordinator), there were times in the meetings he would nudge me a little bit and said I was going to handle install today. He kind of put me on the spot and I kind of got into that role and it felt good and I enjoyed it.

“I enjoyed making sure guys were on the same page and this and that. So at first it started out as a little small thing and then I started getting more involved and now years later look where I’m at now. It was a process that I thought about a long time ago and never knew that I would actually do it. I was fortunate enough to hook up with Coach (Will) Muschamp and he gave me an opportunity and it just went from there.”

Last year Peterson was announced as one of the top 25 players to ever wear a Jacksonville uniform as the Jaguars celebrated their 25th anniversary.

Peterson talked about being recognized in that fashion.

“That was a huge honor,” Peterson admits. “I was a guy that never really played for the honors because I just wanted to win ballgames and have fun. So to get an honor like that, there’s really no word in the dictionary that can really explain it. To have my kids be of age to where when I get an award they light up more than me, that was probably the biggest award for me.”