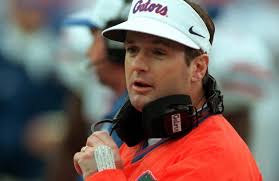 In 2020, the University of Florida will celebrate 25 years since its first national championship in football in 1996. Tony George was a defensive back at Florida from 1994-1998, playing in 44 games during his Gator career, and taking home ALL-SEC honors in 1998.

During the Gators national title run in 1996, George was a sophomore playing in 12 games.

“What I always tell everyone and what made the championship team different from every other team was it didn’t matter which guy you picked, anyone of the guys on that team could have been a leader,” George said. “Everybody was special at something and everyone found their niche and understood their role.

“That defense adopted a mentality after getting a shellacking in 1995 against Nebraska, that our defense was going to carry us and get us to where we needed to be.”

George, who was coached by defensive coordinator Bob Stoops in 1996, was asked when head coach Steve Spurrier realized he had something special in Coach Stoops.

You don’t always get a second chance in life, but the 1996 Gators had one. Florida lost to Florida State to end the regular season, but after an improbable series of events, Florida found themselves back against their in-state rival in the Sugar Bowl.

George was asked about both meetings and why the second game was so much different than the first.

“We didn’t realize how important it was to understand the opponent because we really didn’t have to do that at that time,” George said. “When we realized that Florida State was equally as good as we were, equally as fast as we were and equally as good a coached as we were, we tried to kick it in just a little bit too late in that first game.

“All I can remember after that first game is everyone talking about how Danny Wuerffel kept getting hit, but it wasn’t just Danny because there were some defensive guys getting hit in the mouth as well and we were taking it lightly.

“I can remember asking every guy what they wanted for Christmas and they said to be able to play Florida State again because it will be a different outcome. I think that carried into the pregame of the second game because we had a different presence coming out there and Florida State I think felt that. Florida State had what we had in Tallahassee, they got down early in New Orleans and couldn’t dig themselves out of that hole and that’s what got us the championship.”

George concluded by talking about those Gator football teams from 1994-1998 and what made them so dominant in the SEC.

“I’m a firm believer in attitude reflecting leadership and everything we did was a result of Coach Spurrier and Coach Stoops,” George said. “It was implementing and believing that we could do it. There wasn’t anything that the offense couldn’t get accomplished and there wasn’t anything that the defense couldn’t get accomplished.

“Having the right leaders in place is what developed that mentality for us to realize that championship caliber teams are built all year long. They build you in the classroom, in the community, and then when we step on this field. We had the right staff that put it all out there.”