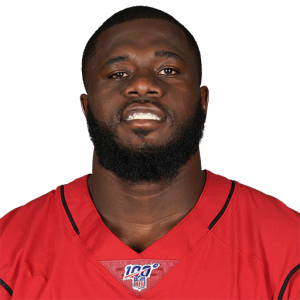 The Jaguars took a step towards replacing departed veterans Calais Campbell and Marcell Dareus along their defensive line.

The team announced on Thursday that it has agreed to terms with Arizona defensive lineman Rodney Gunter. The deal is reportedly three years and worth $18 million.

Gunter, 28, should be able to help the Jaguars at Campbell’s old strongside end spot and be a help inside at tackle as well.

“We really like what Rodney brings to the team, both as a player and as a person, and we think he can play multiple positions for us,” Jaguars coach Doug Marrone said in a statement.

“We know he’s a good player against the run, but we think we can get some three-down play out of him and get some pass-rush. We have high expectations for him, and we are excited about him. He is one of the pieces that we feel is going to help us defend the run and help us become a better defense.”

In Gunter’s five seasons with the Cardinals, he appeared in 77 games with 38 starts and totaled 126 tackles (26 for loss) and 11 sacks, while also forcing two fumbles.