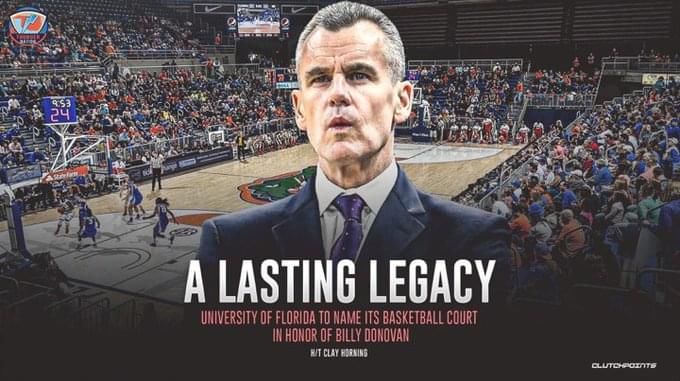 Former University of Florida Athletic Director Jeremy Foley joined “XL Primetime” on 1010XL to discuss the legacy of former Gator basketball head coach Billy Donovan. Donovan is set to be honored this weekend in Gainesville by having the basketball court named in his honor.

Foley started off by talking about the memories he had of the back-to-back national title teams Donovan had in 2006 and 2007.

“We had an incredible head coach, a great coaching staff and certainly once-in-a-generation type players that stayed that extra year to culminate that dream.”

Foley talked about what lead him to hiring Billy Donovan from Marshall back in 1996.

“We had pockets of success in basketball, but had only been to the NCAA Tournament five times at that point,” Foley said. “Our basketball was really never on the map and I just thought to have an athletic program that was recognized nationally for being top notch, you can’t just have a football program.

“We talked with two people and the meeting with Billy was just incredible. I just had a sense that there was something special about him.”

Foley was asked how he was able to keep Donovan in Gainesville for 19 years when seemingly every time a big job opened up, Donovan’s name was always being talked about.

“Billy is a relationship guy,” Foley said. “That’s probably why he recruits so well, why players play so well for him and why people here in town still talk about him. It will be a love fest this weekend because he had a great relationship with everybody.

“I remember when Billy took the Orlando Magic job for three days and then changed his mind and came back to Florida. About two or three weeks after that I asked him why did you change your mind? He told me he woke up and realized he was happy in Gainesville and he was happy at the University of Florida and I didn’t want to mess with my happiness. That was pretty much his career here for 19 years.”

Finally, Foley was asked what this weekend, and what the naming of the court in Gainesville after Donovan will mean to him?

Florida will honor Billy Donovan this Saturday night when the Gators play host to Vanderbilt with tipoff set for 8:00.