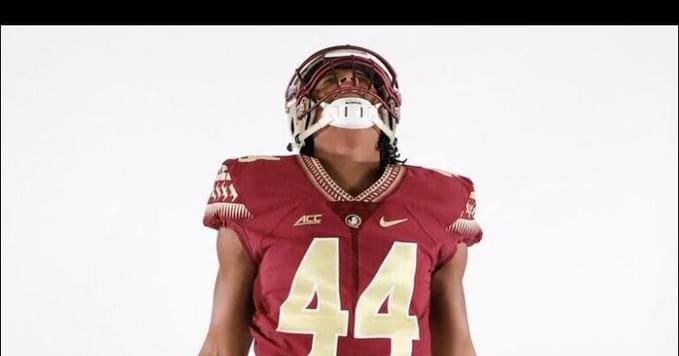 Florida State picked up a huge commitment from the Jacksonville area last week when four-star Sandalwood linebacker Branden Jennings pledged to the Seminoles. Jennings talked with 1010XL about his commitment.

“Coach (Mike) Norvell and the whole new staff, I just feel like they are going to bring it back,” Jennings told 1010XL. “I felt like it was a good position for me and I was their top priority. They also liked my versatility and told me where I stand as far as playing linebacker and being able to play early.”

Jennings likes what he sees when in the new head.

“Coach Norvell is a real energetic guy,” Jennings said. “He has experience and he brought Memphis back from a drought that they were in and I just feel like he is going to do a great job. He is real straight forward and genuine guy.”

“My dad didn’t really side on my decision and my brother is at the University of Miami right now, so this was really my own decision,” Jennings said. “Florida State really came at me the most and recruited me hard, so I decided to verbally to commit to them right away.”

Jennings older brother, Bradley Jennings Jr., will be a redshirt-junior for Miami this fall.

Jennings, (6-foot-3, 225 pounds) is considered to be among the top five outside linebacker prospects in the nation for the 2021 class according to 247sports.com. Even with that high national ranking, Jennings isn’t satisfied.

“I feel like I’m a little underrated and I just keep working hard,” he said. “I need to hold myself to a higher standard than four or five stars or anything else that they give me.”

As for the type of player the Seminoles are getting with Jennings.

“I try to play physical, aggressive and sideline-to-sideline,” Jennings said. “I like to come downhill and I’m a hitter. I like to play coverage, really I like to do it all.”

Finally, Jennings was asked what it means to know that he will play at Florida State on the same field that his father played on two decades ago.

“It’s a good feeling,” he said. “We are just trying to get back to the same stage that they were on. We want to get it back to that championship roll.”

With the addition of Jennings, Florida State now sits at five commitments for its 2021 recruiting class.