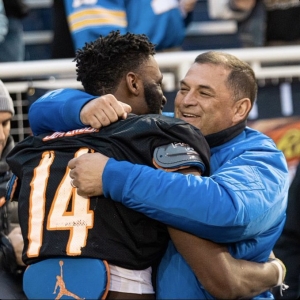 Former Florida Gator wide receiver Van Jefferson is one of a handful of Gator prospects in Mobile, Alabama participating in the 2020 Senior Bowl. Jefferson joined “XL Primetime” on 1010XL to talk about the excitement he has getting the draft process underway.

“I’ve been dreaming about this moment for a long time and I remember when I got the invite I was all excited just to come out here and showcase what I can do,” Jefferson told 1010XL. “I’m excited to be here, but I’m also ready to compete.”

Jefferson transferred to Florida from Ole Miss prior to the 2018 season; he talked about the new start he received in Gainesville.

“When I got to Florida I was just rejuvenated and filled with joy that they brought me into the family,” Jefferson said. “It was a joy being at Florida for two great years.”

Jefferson was asked about Dan Mullen and what Mullen has accomplished in two years with the Gators.

“Coming in, I think Coach Mullen brought back the Gator standard,” Jefferson said. “That’s what he preaches and that’s what he prides himself in. He brought in a great coaching staff and we all bought into his system.

“Two back-to-back New Year’s Six bowls and 21 wins in two years, he’s bringing it back and I was just glad to be a small piece in that.”

Most Florida fans want to see more of quarterback Emory Jones on the field. Jefferson gave his opinion on how Florida should use Jones in 2020.

“I think Emory is going to have a bigger role this year,” Jefferson said. “He can throw the ball really well and he can run it as you can see. I feel like he’s going to do well this year. I’m excited to watch him and see how he does.”

Finally, with the departures of four senior wide receivers from the 2019 team, some Gator fans are concerned about that position moving forward. Jefferson, however feels a little differently.

“I think they can expect a lot more,” Jefferson said. “I think they will do better than what we did. They have some great talent with Trevon Grimes, Jacob Copeland, Kyle Pitts and some young freshman coming up as well. I feel they’re going to surpass a lot of people’s expectations.”