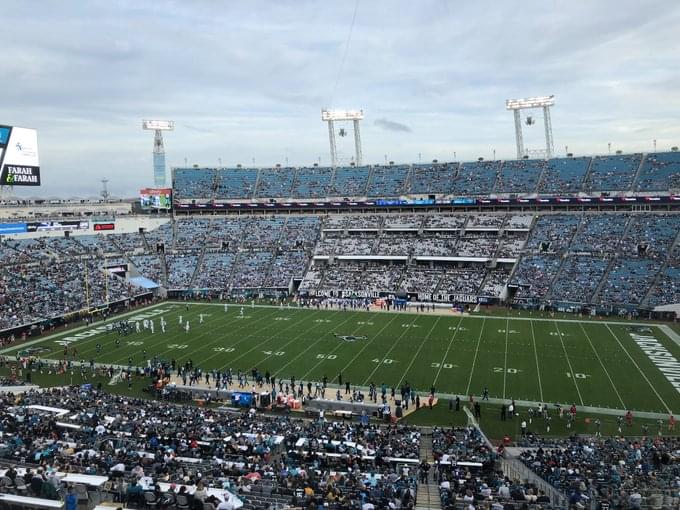 The Jaguars did manage to close out a 6-10 season with a victory on Sunday, defeating Indianapolis 38-20 in a game in which they scored the last 25 points at TIAA Bank Field.

The fans were incredible in their support of the team that limped in having lost six of its last seven games.

There were promising signs from rookie quarterback Gardner Minshew, who threw for 295 yards and three touchdowns.

The pass rush, the strength of this team for the last few years, got back to its ravenous ways in the second half. The Jaguars sacked Colts quarterback Jacoby Brissett three times and hit him on seven drop backs.

Defensive end Yannick Ngakoue provided the play of the game when he stripped Brissett on an incredible second effort after falling down and then chasing him down from behind. End Calais Campbell picked up the ball and ran eight yards for a touchdown that gave the Jaguars a 31-20 lead with 9:28 to play in the game.

Leaving the stadium with a victory felt good for everyone.

However, it can’t remove all the stink from the season.

Remember the statement Khan issued after the finale last season when he decided to keep the front office and coaching staff intact despite a 5-11 record. Here is how it ended.

“Stability should not be confused with satisfaction, however. I am far from content with the status quo and while it’s best to put 2018 behind us, I will not overlook how poorly we accounted for ourselves following a 3-1 start. There were far too many long Sundays over the last three quarters of the season, with today’s loss in Houston being the final example, and that cannot repeat itself in 2019. That’s my message to our football people and players, but also our sponsors and fans, both of whom were remarkable.”

Marrone is 8-20 in his last 28 games. That simply isn’t good enough to warrant a fourth season, even if his first year resulted in a trip to the AFC Championship Game after the 2017 season.

There are too many numbers to ignore.

The Jaguars were designed to be a physical team. Yet, they rushed for three touchdowns and gave up 23 this season. Let that number wash over you. They had a rushing touchdown deficit of 23-3. How did they win six games?

Discipline has been a major issue for two seasons now. The Jaguars committed 30 more penalties than their opponents for 282 more yards this season.

Third down was a disaster. The Jaguars offense converted 34.5 percent of the time. The opponents converted 41.6 percent on third down.

The Jaguars were outscored in the first half 212-119 this season. That speaks to a glaring lack of coaching. Marrone and his staff could not anticipate ways to out-scheme the opponent.

The data is simply gross.

There is no compelling reason to believe Marrone can turn this around.

He is a nice man who has handled some tough situations with grace, but the Jaguars need a fresh approach.

Caldwell deserves blame for the nightmarish numbers as well.

He has been the general manager for seven seasons. The Jaguars have stunk for six of them. He has presided over two coaches (Gus Bradley and Marrone) as well as two major quarterback decisions (Blake Bortles and Nick Foles).

The 2019 draft was his best one. End Josh Allen set the franchise rookie sack record with 10 ½. Right tackle Jawaan Taylor looks like a potential Pro Bowler. Minshew finished with 21 touchdowns and 10 turnovers, going 6-6 as a starter.

Caldwell has talent and is by no means out of his league. He’s not awful at his job like past general managers here have been. He’s just below average. Why accept anything in the organization that isn’t good? Caldwell is the NFL quarterback equivalent of Derek Carr. He can look stellar, but the overall consistency isn’t there and he rarely wows you.

It’s impossible for me to believe that all the personnel mistakes in Coughlin’s run (2017-19) were decisions Caldwell would not have made. While Caldwell was not the top voice in the last three years, he still has responsibility for the roster.

The Jaguars have a bad roster. The defense has fallen apart with major needs at all three levels. The offense needs help everywhere.

The salary-cap situation is among the worst in the league in terms of flexibility.

There needs to be a new brain trust building the roster.

Khan promised the Jaguars faithful that he would not tolerate another long season.

For Khan to maintain his credibility with the fans, he needs to finish off the clean sweep he started when he fired Coughlin.

Khan will build a winner here.

He’s too smart not to.

He can’t allow his loyalty to keep him from making the difficult but wise choice.

He needs a fresh perspective in his front office and with his coaches.

This isn’t a rebuild, but the Jaguars must be relaunched with a new vision.