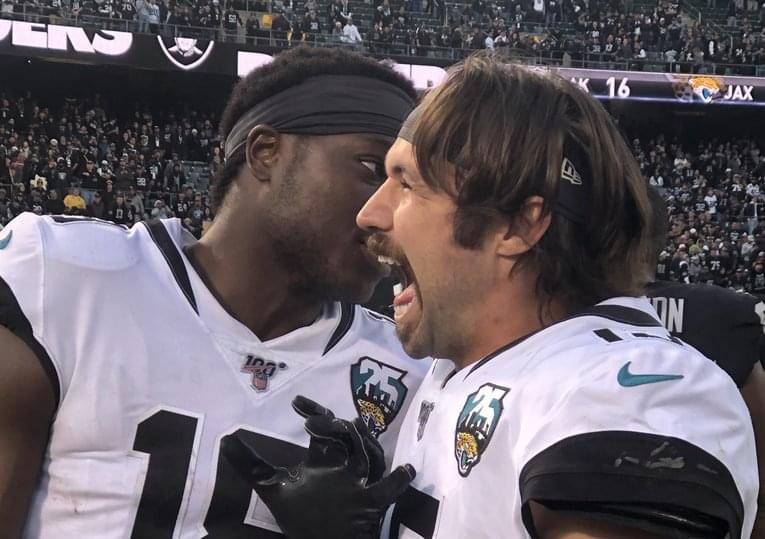 The Jaguars were able to win more than a football game on Sunday.

They won back their dignity.

This season will be a disappointment. However, at least these Jaguars (5-9) managed to avoid ending the season in utter humiliation.

The five-game run of losses by at least 17 points is over. The possibility of a franchise-worst eight-game losing streak to close the season is over.

The rookie quarterback saved them.

Gardner Minshew threw two touchdown passes in the fourth quarter to lead the Jaguars to a 20-16 win over Oakland. The Jaguars sent the Raiders to Las Vegas with a loss, ending their run at the Oakland-Alameda County Coliseum.

The sixth-round sensation improved to 5-5 as a starter by guiding the Jaguars to touchdowns in the final 5:15 of the game.

Minshew connected with receiver Chris Conley for both scores. The first went for six yards.

Minshew and Conley completed the game-winner on a four-yard slant with 31 seconds left.

Screw the draft. Auburn defensive tackle Derrick Brown will probably be there anyway when the Jaguars are on the clock.

The Jaguars needed to feel good for a few hours.

Enjoy Yannick Ngakoue. The defensive end played a fantastic game, making five tackles (four for a loss) with two sacks and a pass breakup. The fourth-year veteran tied Tony Brackens for the most multi-sack games in franchise history with eight. Ngakoue’s 37 ½ career sacks are the most in Jaguars history through four seasons.

Enjoy Josh Allen. The defensive end recorded his 10th sack of the season on Sunday, extending his franchise rookie record.

This fourth-quarter rally was especially impressive since the Jaguars were without top receiver DJ Chark (inactive with an ankle injury).

The Jaguars had lost 23 straight games when trailing by double digits in the fourth quarter prior to today’s victory.

Minshew was able to keep his focus, despite large chunks of unproductive drives.

On the last two drives, Minshew was 10-of-12 passing for 88 yards with two touchdowns and also ran twice for 19 yards.

Enjoy it when they do.

Also be happy for those that won’t be sticking around (likely Marrone and his staff at a minimum) that they will at least have this moment. Defensive coordinator Todd Wash’s unit produced a scoreless second half.

No one will ever be able to say the team quit.

The 2019 Jaguars weren’t good, but they salvaged their dignity Sunday at Oakland.