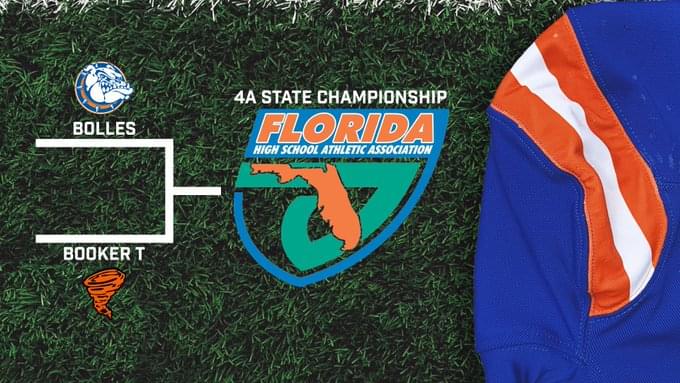 The Bolles Bulldogs have had an incredible season under first-year head coach Matthew Toblin. Bolles won 11 games in a row and if they were to make it 12 on Wednesday night, they would win the FHSAA Class 4A state championship.

If you rewind the clock back all the way to August 24, to the Publix Bold City Showcase presented by Sonic, you will remember Bolles falling to University Christian 21-14 in a hard-fought game. That was Bolles’ only loss in 2019.

Since that game Bolles has rattled off wins over all comers including St. Augustine, Creekside, Daytona Beach Mainland, Bradford and Cocoa.

There is little doubt however that the toughest test for Bolles will be in Wednesday night’s 4A state title game. Booker T. Washington enters the game on a five-game winning streak of their own including knocking off some of the state’s elite programs like Miami Carol City and Miami Gulliver Prep.

Booker T. Washington also has wins this season over Miami Columbus who is playing for an 8A state title on Friday night and Trinity Christian from right here in the Jacksonville area.

When the 4A state playoff brackets came out over a month ago, most figured it would be Bolles and Booker T. Washington in the finals and they were correct.

Bolles is the only chance for Northeast Florida to capture a state title in 2019.

The area had much success recently with Raines winning state titles in both 2017 and 2018 and Mandarin going on a magical run to capture the 8A state title last season.

No matter what happens in tonight’s game it has been a great season for Bolles head coach Matthew Toblin who is in his first-year since coming over from Ponte Vedra.

Toblin now gets another chance to coach a team to a state crown, doing so at his dream job which must be extra sweet for the head coach.

Bolles and Booker T. Washington for the 4A state title –they have seemingly been on a collision course all year long and the winner of their game in Daytona will be a state champion.

Bolles and Booker T. Washington kicks off Wednesday night at 7:00 and the game can be heard on 1010 AM.