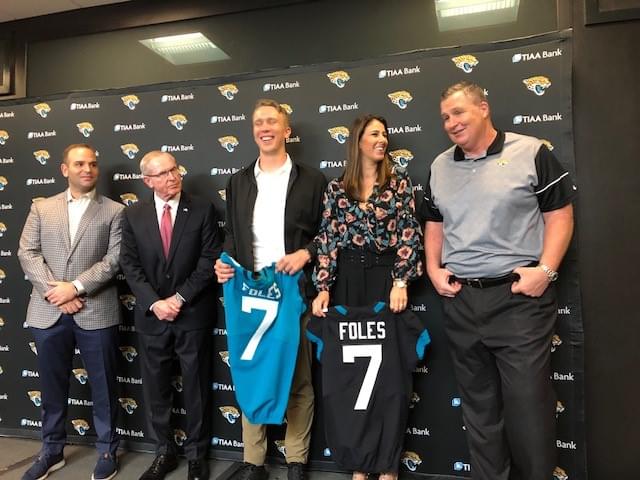 However, this is a new low.

Nick Foles is the worst investment this franchise has ever made.

Coughlin and Caldwell signed Foles to a four-year, $88-million contract with $50.1-million guaranteed in March.

Imagine having people you employ spend over $50 million of your fortune in such fashion.

Foles’ tenure here as a viable starting quarterback is over.

It ended Sunday as Foles was turnover prone and then benched in a 28-11 loss to Tampa Bay at TIAA Bank Field. The 30-year-old Foles threw an interception and lost two fumbles (one returned for a touchdown) on the first three possessions of the game. Foles’ other three possessions ended without a first down.

Jaguars coach Doug Marrone replaced Foles at halftime in favor of rookie Gardner Minshew with the team down 25-0.

Marrone wouldn’t commit to naming a starter moving forward after the game.

I won’t commit to eating this week, but you can assume I will.

You can also assume that there’s no way Marrone starts Foles on Sunday against the Los Angeles Chargers.

Foles is winless in four starts with this franchise. He’s been injured early in one game, the opener. He’s been terrible in the other three combined.

Foles has accounted for two touchdowns (both in garbage time) with four turnovers since returning from injured reserve.

The sad thing for Khan is this is just the latest example of Coughlin and Caldwell devoting big financial resources to players incapable of living up to the contract.

Coughlin and Caldwell gave former starting quarterback Blake Bortles $26.5 million in guaranteed money in 2018 only to cut him a year later.

They signed left guard Andrew Norwell last year to a contract that guarantees him $30 million. He’s been awful.

Foles’ guarantee is preposterous, especially since the Jaguars appeared to be bidding against themselves in courting him.

Add the three together and that’s $106.6 million in guaranteed money for Bortles, Norwell and Foles. All three of those deals were signed in the last 20 months. The Jaguars are 9-19 in that span and 6-18 in their last 24 games.

There’s a real chance Khan will pay Foles $50.1 million for three touchdowns and no victories if he never gets back on the field as a Jaguar.

The Jaguars are also probably stuck with Foles in 2020, unless they convince a team to trade for him. Good luck.

It will cost the Jaguars 22.1 million to keep Foles next season. It will create $33.9 million in dead money if they cut him.

The failure is everywhere with the Jaguars: front office and coaching.

The Jaguars (4-8) have been outscored 129-47 in their current four-game losing skid.

There is nothing redeemable at this point.

Khan has every justification to clean house and start fresh.