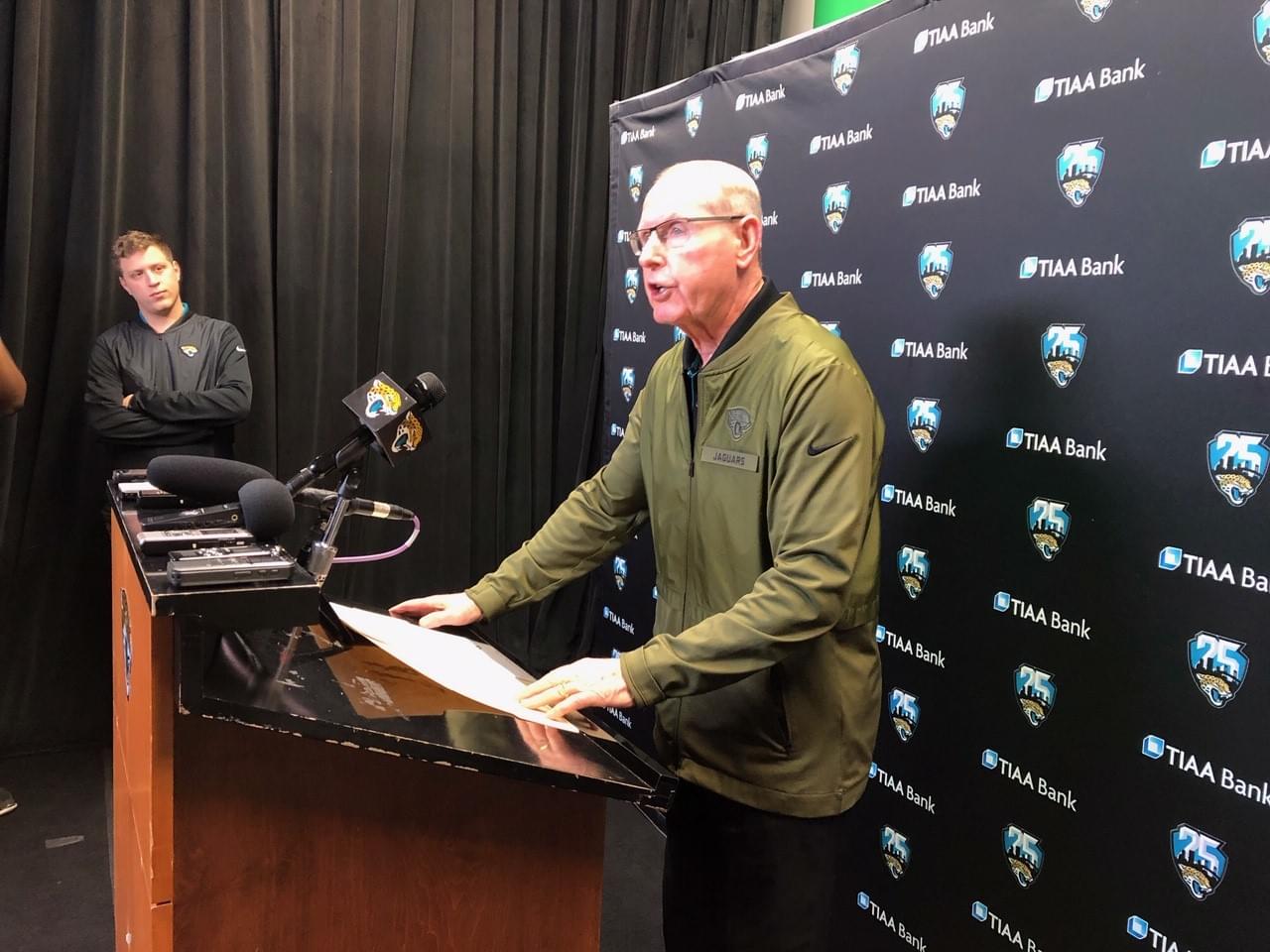 He ended that silence on Wednesday.

Coughlin spent 13-plus perturbed minutes dodging questions about why the Jaguars have won six of their last 23 games and seen a 4-4 start this year disintegrate into a 4-7 record.

Coughlin’s aim was to rally the fans to support the Jaguars, starting Sunday when Tampa Bay (4-7) comes to TIAA Bank Field. The Jaguars have been outscored 101-36 in their last three games.

“We have three more home games,” Coughlin said. “We need our very loyal fans to come forward and support our players and our coaches and create for us the 12th-man advantage. We need everyone on board, and all pulling in the same direction. And by everyone I mean ownership, organization, coaches, players, scouts, staff, our great fans and our entire community.”

The 73-year-old Coughlin then fielded questions in an abrasive manner, offering fans little details on why major decisions were made and what the basic plan is moving forward.

“There are five games to go.”

*What do you need to see out of Nick Foles in those five games?

*What will go into determining Doug Marrone’s status?

*Doug said yesterday he was criticized internally for easing up on guys in training camp. Was that you and why?

“That would be between Doug and I. It’s not for anyone else.”

*Is there an interest in keeping Yannick Ngakoue?

“We have five games to play and everyone has a lot to prove.”

*Any progress on contract extension for Yannick?

“That is not for discussion today, and it wouldn’t be in this setting anyways.”

*What did you do to try to repair your relationship with Jalen Ramsey?

“I’m not going to speak about Jalen. He’s no longer a part of our team. He’s a member of another team.”

*Why has the decline of the defense happened, more personnel, scheme, coaching issue?

“There’s a lot of things involved in that.”

*Can Gardner Minshew be a quality starter?

“We have two very good quarterbacks. We are very fortunate.”

Coughlin did offer some insight on other topics.

He said he has not heard anything about linebacker Telvin Smith returning. Smith surprisingly announced he was taking the season off after the draft.

“Our penalty statistics are very bad and must be corrected,” Coughlin said. “We must find a way to play four solid quarters of winning football, and all three phases must play in harmony if we are to win.”

“The nucleus of this team is young,” Coughlin said. “The leading receiver is 23 (Chark). The leading rusher is 24 (Fournette). The leading tackler is 24 (Myles Jack). And the leader in sacks is 22 (Allen). We are just one of three NFL teams with multiple draft picks in the 2020 draft. To be clear, there are no excuses.”

Coughlin did talk about the decision to put Foles back into the lineup over Minshew.

“He has only played two games,” Coughlin said. “Didn’t play in the preseason. He has played two football games. Gardner played very well, did not play well in London. Nick was ready to come back. That was the basis of the decision at that time.”

Coughlin was sent out to try and rally support for the team. It’s unlikely the Jaguars fans feeling apathetic about the direction of the franchise will be inspired to do so when Coughlin is so reluctant to provide them basic information.