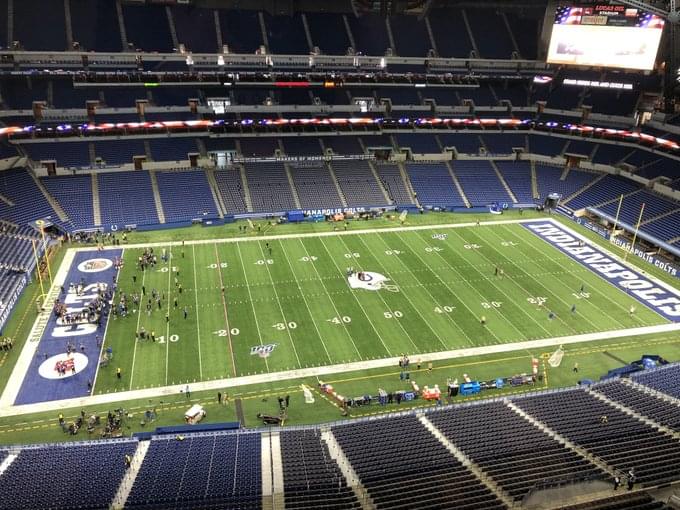 INDIANAPOLIS – The Jaguars defense finally had the Colts in a tough position.

Indianapolis faced a third-and-19 from their own 24-yard line on their first drive of the third quarter leading 10-7.

The Jaguars would get a stop and have good field position.

Colts quarterback Jacoby Brissett threw a safe screen to running back Jonathan Williams. It was the kind of play a coach calls to get some field position back before punting.

The Jaguars allowed Williams to run for 31 yards. The Colts went on to score a touchdown on the drive.

The Jaguars showed no fight after that.

Use any adjective you’d like: embarrassing, pitiful or pathetic would all apply.

In a game the Jaguars had to have, coming off a bye week, they were trounced by a team that lost to the woeful Dolphins last week.

Indianapolis dominated while running for 264 yards in a 33-13 victory on Sunday at Lucas Oil Stadium.

The Jaguars scored a meaningless touchdown with 59 seconds left in the game. Fittingly, Foles’ pass on the two-point try was intercepted and returned for a score.

The Colts (6-4) still have playoff life.

The Jaguars are dead at 4-6. Could they win out and get into the playoffs? Perhaps.

But this team has no chance of doing that.

There’s no fight in them.

The math will tell you it isn’t over. I’m telling you the season is over.

How the Jaguars could show no fight in a game of this magnitude certainly makes it fair to question coach Doug Marrone. The third-year coach is now 22-25 counting playoffs but is 6-16 in his last 22 games.

“We got handled,” Marrone said.

Marrone is coaching for his job in these last six games. He probably needs four wins to have a chance of returning.

In the last two games, the Jaguars have been outscored by Houston and Indianapolis 59-16.

The Texans were playing in London for the first time. The Colts didn’t have the bye the Jaguars did last week.

None of it mattered.

Marrone talked veteran quarterback Nick Foles up all week. Foles started off strong with a 34-yard touchdown pass to receiver DJ Chark to give the Jaguars an early 7-0 lead.

Foles was subpar after that. Don’t be fooled by a stat line propped up in garbage time.

The Jaguars run defense was shredded again. Middle linebacker Myles Jack had another forgettable game, but he wasn’t alone.

Colts running back Marlon Mack had 109 rushing yards before exiting the game with a hand injury with 11 minutes left in the third quarter. Williams surpassed his total, gaining 116 yards on 13 carries.

Williams entered the game with one yard rushing this season.

Even when the Jaguars defense made a terrific play, it couldn’t capitalize. Defensive end Yannick Ngakoue strip-sacked Brissett at the Indianapolis 22 late in the first half. Defensive tackle Taven Bryan had a great chance to recover the fumble, but he couldn’t get a handle on it and the Colts recovered.

That was one of many that the Jaguars will lament when they look at this film.

They blew a chance to kickstart a run.

Now, all is lost.

The Jaguars are just playing out the string now.

They aren’t playing for the playoffs. They’re playing and coaching for their jobs next year.