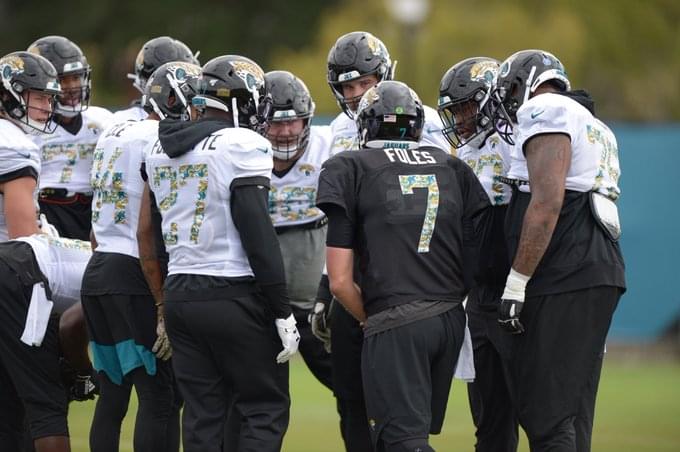 Nick Foles was ready to reintroduce himself to the Jaguars fan base on Wednesday.

He did in captivating fashion.

Foles’ first season with the Jaguars was dealt a major setback when he broke his collarbone 11 plays into the opener, a loss to Kansas City on Sept. 8.

Foles was placed on injured reserve, missing eight games, before Jaguars coach Doug Marrone elected to turn back to Foles over impressive rookie Gardner Minshew. The Jaguars (4-5) travel to Indianapolis (5-4) on Sunday in a must-win game.

The 30-year-old Foles is back leading the team and reminding everyone why he is so beloved in Philadelphia. That love goes beyond winning Super Bowl MVP honors with the Eagles two years ago.

Foles delivered what he described as a sermon to reporters on Wednesday.

We’re taught as writers to use quotes sparingly and make them concise. However, it would be a shame to break this message up, so forgive me.

“I still can have joy in an injury,” Foles said. “People hear that and say, ‘That’s crazy,’ but when you believe in Jesus and you go out there and you play, that changes your heart. You only understand it when that purpose is in your life – just like when I hoisted the Lombardi Trophy. The reason I’m smiling is my faith was in Christ. In that moment, I realized I didn’t need that trophy to define who I was, because it was already in Christ. That’s my message when I played.

“Same thing happens when I get injured. We tend to make this so much about us as human beings, we tend to make it about us as athletes. It’s not about us, it really isn’t. If you make it about yourself, you’re probably going to go home at night, lay your head on your pillow and be very alone and very sad. Then hopefully some day you can find that purpose in your life, because my purpose isn’t football, it’s impacting people and my ministry happens to be the locker room.

“I know that’s a sermon in itself, but that’s how I go through life, and the good Lord’s been there. It’s not always about prosperity. I don’t believe in the prosperity gospel, I believe if you read the word of God and you understand it, there are trials along the way but they equip your heart to be who you are.”

You don’t often see a message this powerful in a Wednesday press conference. But this is who Foles is and it makes it easy to see why he is considered such a uniquely strong leader.

“The big thing was obviously appreciation for Gardner,” Foles said. “I think the world of him like I have said before.

“There is a lot on us every single week to go out there and prepare and play, so this is time just to take a breath and when you come back, come back refreshed ready to grow. Staying in the moment and just attacking the day at hand and simplifying things in your mind. The message was really simple. It was really to just take the pressure of football off.

“We are blessed to do this, absolutely, but there is a lot of pressure. To allow guys to know that I feel that pressure as well, I know what the anxiety is like, but this is how I counteract it and we can do this together. That is what I talk about with culture, brotherhood. Talk about not just X’s and O’s, but life in itself because when you can do that, you grow together as a team and as people. I am a firm believer that in the fourth quarter, players make plays. If you trust the guy next to you, you are probably going to execute better than if you don’t. That is sort of what we are building here.”

Foles’ bye week had a somber tone. His grandfather passed away.

“Unfortunately, my grandfather passed away, the one I grew up with,” Foles said. “Life happens. I was able to go to his funeral and speak and be with my family. It was more of a celebration of his life, and he was the one that would always want to talk to me after games. When I step on the field, I will always think of him and what he means to me. Being with family in Austin, Texas and bringing my daughter and my wife and letting my daughter spend time with cousins. It was really nice to have that before we get back on the field.”

I love Minshew Mania. However, I can’t wait to watch Foles play and lead this team for the next seven games and hopefully a playoff run.