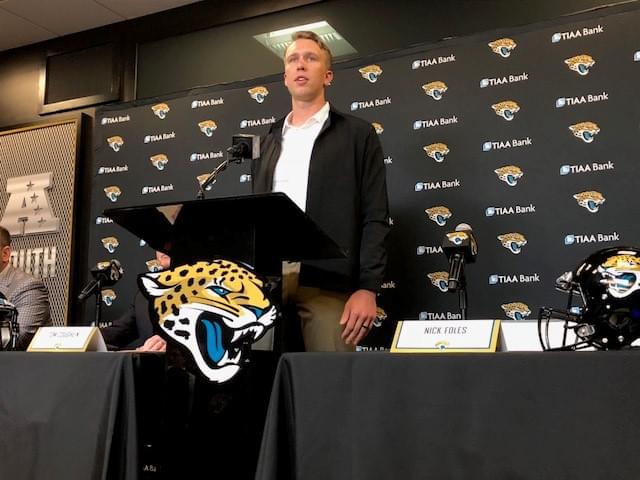 The Jaguars need to get hot in the final seven games to make the playoffs.

Marrone announced Tuesday that Foles will start at quarterback over rookie Gardner Minshew when the Jaguars (4-5) return to the field Nov. 17 at Indianapolis following this week’s bye.

The Jaguars signed the 30-year-old Foles to a four-year contract worth $88 million with $50 million guaranteed in March. Foles, who received a $25-million signing bonus, played 11 snaps against Kansas City in the opener on Sept. 8 before breaking his collarbone. He completed 5 of 8 passes for 75 yards with a touchdown and no interceptions for a passer rating of 132.8.

The Jaguars placed Foles on injured reserve, forcing him to miss the next eight games.

Minshew was sensational from the start in relieving Foles, surpassing expectations in going 4-3 as the starter. However, his bid to possibly unseat Foles once healthy fell apart in Sunday’s 26-3 loss to Houston at London’s Wembley Stadium.

Minshew, selected in the sixth round, threw for 13 touchdowns and four picks for a passer rating of 92.8. He completed 61.2 percent of his passes, ran for 235 yards and lost seven fumbles.

Prior to joining the Jaguars, Foles has started a dozen meaningful games over the past two seasons for Philadelphia. He went 10-2, including 4-1 in the playoffs. He faced quality defenses in eight of those games: Atlanta (twice), Minnesota, New England, New Orleans, Houston, the Rams and Chicago. Six of the 12 were road games, five were at home and one was neutral (Super Bowl).

The numbers speak for themselves over that 12-game span.

Foles completed 67.8 percent of his passes, averaging 271 passing yards a game with 21 touchdowns and 10 interceptions. He scored two other touchdowns (one rushing, one receiving) while losing two fumbles. Foles was sacked 15 times, something he deserves credit for as well.