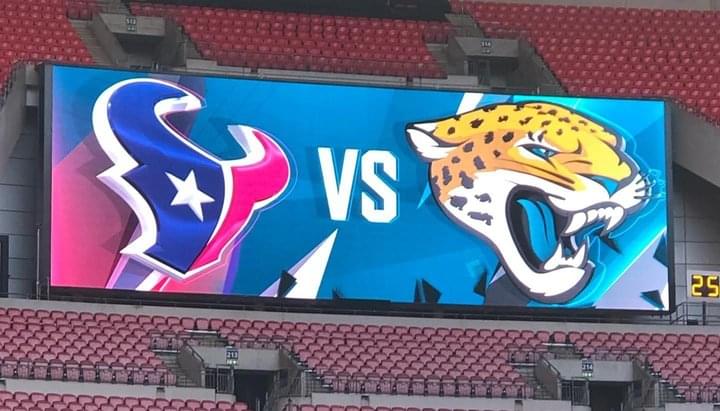 Gardner Minshew did his job over an eight-game stretch.

The rookie sixth-rounder was forced into a near-impossible task when starting quarterback Nick Foles broke his collarbone on the 11th play of the season.

The Jaguars lost that game to Kansas City, despite an amazing debut by Minshew.

After the game on Sept. 8, I wrote that Minshew needed to go 4-4 to give the Jaguars a chance when Foles returned.

He accomplished the feat.

His overall performance over eight weeks was tremendous, leading to Minshew Mania becoming one of the NFL’s hottest first-half story lines.

Now, that story will pause.

Minshew was dreadful in a 26-3 loss to Houston on Sunday at London’s Wembley Stadium.

Minshew played turnover free for the first 50 minutes of the game, before ending the Jaguars’ last four possessions with a giveaway.

He completed 27 of 47 passes for 309 yards with two interceptions for a 59.6 passer rating and lost two fumbles.

This was by far his worst outing. Minshew never could take advantage of a Houston defense missing several starters.

It didn’t help that receiver Dede Westbrook was inactive with a neck and shoulder injury.

It didn’t help that receiver Chris Conley had multiple drops.

It didn’t help that receiver DJ Chark lost his aggressiveness when called for a questionable pass interference penalty in the first half.

Still, Minshew has to be largely saddled with the dismal outing. The Texans had allowed at least 24 points in each of their last four games.

The hot hand argument is over.

There won’t be any difficult decision for Jaguars coach Doug Marrone.

He will start Foles when the Jaguars (4-5) come off their bye week at Indianapolis on Nov. 17 with a public announcement expected on Nov. 11.

“I’ll tell them probably right before we come back on Sunday,” Marrone said. “We’ll be able to discuss where we’re going to go. That’s pretty much my plan.”

Foles will have to guide the Jaguars to a 5-2 run to have any hope at the final wild-card spot at 9-7. That seems like an incredible longshot, but so did him leading the Eagles to a Super Bowl triumph two years ago.

For now, we have to wait until Minshew gets a second chance.

I have no doubt that he will. He’s shown too much promise not to be in the long-term plan.

Minshew Mania sure was a lot of fun. It helped us block out the terrible final month of the Jalen Ramsey Debacle.

Minshew Mania made the Jaguars cool in the NFL landscape, a rare feat.

Don’t cry because it’s over.

Smile because it happened.

Minshew Mania is over.