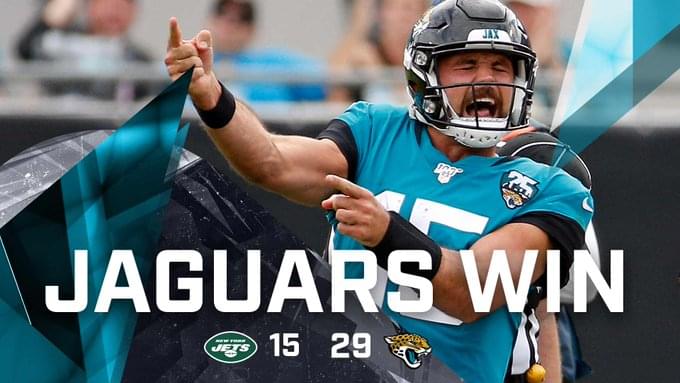 There was an uneasiness at TIAA Bank Field.

The New York Jets had just scored a touchdown and converted the two-point conversion to cut the Jaguars lead to 22-15 with 13:07 left in the fourth quarter.

The Jaguars needed an answer.

They marched and got close. However, a doomed play call saw running back Leonard Fournette lose 7 yards on a sweep from the Jets 1-yard line. It was third and goal.

The sixth-round phenom threw an 8-yard touchdown pass to receiver DJ Chark to put the Jets away in a 29-15 win.

Minshew displayed the kind of playmaking ability on the touchdown that has made him one of the NFL’s most intriguing first-half story lines. He rolled right, sidestepped a Jets defender before throwing an accurate heater from the 11 to Chark in the end zone.

“That was crazy because I was yelling, “Throw the ball! Throw the ball!” because I didn’t know what was happening and then I saw that,” Linder said. “That son of a [expletive], Minshew. That’s crazy. He’s a gunslinger. Me and Cam looked at each other and started laughing.”

Minshew provided his viewpoint of the play after the game as well.

“I kind of just blacked out on that one,” Minshew said.

If that isn’t on a teal T-shirt I can purchase by Tuesday morning, I’m going to be disappointed.

Minshew went on to praise Chark for continuing to work himself open.

“He did an awesome job,” Minshew said. “DJ came from all the way on the other side of the field and worked all the way back. That is a credit to him working and just finding a way. It was covered on the front end and especially down there you can make stuff happen and get a little time. I saw he was going to work open and one of the defensive linemen had me cut off, so I stepped back in and threw it. It was a good play.”

A play that enabled the Jaguars to even their record at 4-4, staying close to AFC South leader Indianapolis (5-2).

A play that allowed Minshew to improve to 4-3 as a starter since taking over for Nick Foles in the opener.

“He’s great,” Robinson said. “We love what he’s been able to bring to us. Getting out of the pocket and able to do a lot of things. I mean he’s been great, just what we needed. When Nick went down, he didn’t blink. He stepped in and he’s been great for us.”

There were more dazzling plays from Minshew than just the touchdown pass to Chark.

Minshew led a touchdown drive on the opening series of the game, connecting on a pass to receiver Keelan Cole from 6 yards out. Minshew showed decisiveness and a lively arm on the throw, which helped the Jaguars shake off their current red-zone woes. The score to Chark also will build some red-zone confidence.

“It’s big,” Minshew said. “Definitely sick of hearing about the red zone stuff so we’re trying to score touchdowns as best we can.”

Minshew’s most explosive play came on the Jaguars second touchdown.

He escaped pressure, ran up towards the line of scrimmage before throwing a ball 32 yards in the air to receiver Chris Conley who took it the distance for a 70-yard touchdown. Minshew credited Fournette with getting enough of blitzing Jets safety Jamal Adams to allow him to escape and make the throw.

“I knew he was going to catch it, but I didn’t realize he was going to go all the way like that,” Minshew said. “What made that play was Leonard starting to fake and then came all the way back to make that block to send him around where I could step up and make that. That’s not on the stat sheet but that’s a Leonard Fournette play right there. That was absolutely huge.”

Jaguars coach Doug Marrone maintained the stance he’s had for weeks: Minshew is a rare rookie.

“He kept his eyes down the field with the big play to Conley,” Marrone said. “That was a big play in the game. … He does not play like he was brought into this league, a sixth-round draft pick or something like that. He doesn’t play like that.”

It’s going to take something historical for Marrone and the Jaguars front office to stick with Minshew once Foles can return from his broken collarbone coming off the bye on Nov. 17 at Indianapolis.

Minshew is the first player in NFL history to throw for at least 13 touchdowns with two or fewer interceptions through his first eight career games.

Now, comes the final opportunity – vs. the Texans on Sunday at London’s Wembley Stadium.

England delivered Beatlemania to the United States on Feb. 7, 1964.

Minshew Mania will be at its peak when the Jaguars host Houston.

Foles has been everything the Jaguars hoped. None of this is his fault.

Minshew brings mobility Foles doesn’t. He’s on pace to run for 400 yards this season, in addition to throwing 26 touchdowns to four picks.

If the rookie brings home a win and a 5-4 mark heading into the bye, he should be the starting quarterback.