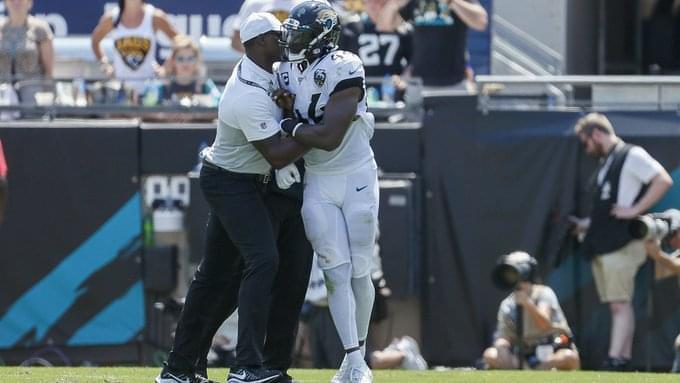 The Jaguars defense is still talented, but the days of 2017 when there was an embarrassment of riches are gone.

The Jaguars have lost three games this season. The defense is on the hook for two of them, including Sunday’s 34-27 loss at Carolina. The Jaguars offense had 507 yards with 28 first downs in the loss.

“The guys that are in that room, to be honest with you, they were hurting afterwards,” Jaguars defensive coordinator Todd Wash said. “Once again, I told them, ‘We haven’t lost a lot of games defensively and we did last week.’”

There simply are too many pieces of the 2017 defense that are absent to expect the same results. That defense created 55 sacks, 21 interceptions and 12 fumble recoveries.

Through five games, this defense has 15 sacks and one takeaway.

The losses are significant at every level.

For now, I’m counting cornerback Jalen Ramsey among those losses. Until he plays again for the Jaguars, I believe his future is too uncertain to include him since he’s made it clear he wants to be traded.

The Jaguars (2-3) are gearing up to play their sixth game when they host New Orleans (4-1) on Sunday at TIAA Bank Field. In Week 6 of the 2017 season, 13 Jaguars defensive players logged at least 18 snaps. Eight are gone, if you include Ramsey.

The reinforcements as a whole aren’t as good either. At least, not yet.

The addition of tackle Marcell Dareus in a 2017 midseason trade has helped. D.J. Hayden has been a slight upgrade over Colvin, who was great here before an awful tenure with Houston. Rookie defensive end Josh Allen is meeting Fowler’s production.

None of the other replacements have filled the void left.

The defense was shredded in the opener against Kansas City at home. That was disappointing, but at least at the hands of an unquestioned elite offense.

“It’s fundamentals,” Wash said. “As a coaching staff, I think at times we try to take some wear and tear off of the players in practice and we neglected some things as a coaching staff. I have to take responsibility for that. But we have got to work our base fundamentals each and every day, especially at D-Line play. It’s a monotonous thing, but it’s the same stuff over and over.”

The Jaguars rank 22nd or worse in the NFL in the following defensive categories:

Wash suggested a simpler approach could pay dividends starting immediately against the Saints.

“We have to calm their world down,” Wash said. “I do as a coach, do the things that they’re very good at and let them do those things instead of being creative and all that kind of stuff.”

The Jaguars defense is still capable of playing a fantastic game. The consistent greatness of 2017 is over though – with or without Ramsey.