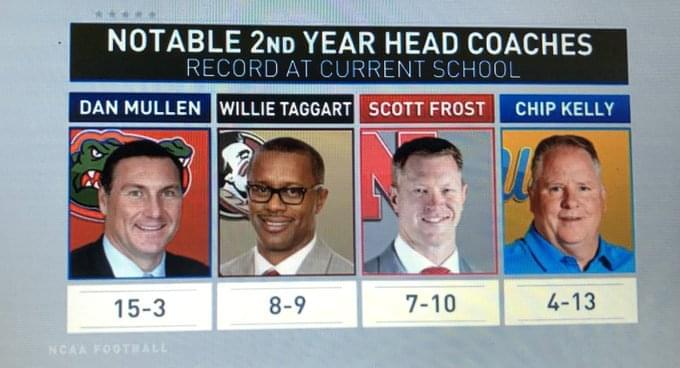 Mullen is now an impressive 16-3 in 19 games as Florida head coach and that includes the Gators current 10 game winning streak. In his short time at Florida, Mullen has coached the Gators to wins over LSU, South Carolina, Florida State, Michigan, Miami and now Auburn.

That’s impressive for a guy who most Gators fans didn’t want when he was hired.

How many Gator fans wanted the up-and-comer, Scott Frost, or the master of the tempo offense, Chip Kelly? At the time of his hiring, Mullen almost seemed like the fallback guy.

Compare Mullen’s 16-3 start at Florida to the dismal 4-14 start for Chip Kelly at UCLA, or the 8-10 mark for Scott Frost at Nebraska.

The fallback guy sure doesn’t seem like such a bad option now, does he?

When you also consider that Mullen inherited a four win Gator club from 2017 it is even more definitive proof that Mullen was the right man for the job.

It’s not just that Mullen is outperforming Frost and Kelly, two coaches that the Gator fan base clearly wanted over him, but he is out performing every second-year head coach in college football. You think Florida State or Tennessee would trade their current head coaches for Mullen? In an absolute heartbeat they would, which again is further proof that Mullen was the right man for this Florida job.

Mullen isn’t just winning games, he is winning games mostly with players he didn’t recruit and he is now winning games, including defeating Auburn on Saturday, with a quarterback in Kyle Trask who hadn’t started a game since his freshman year in high school. If he can win like this, just imagine what he can do when he gets his players on campus.

Florida’s win over Auburn may be looked at as the Gators telling the college football world that they are back and to not take them lightly, but it should be looked at more for the hiring of a coach that nobody at the time wanted and how he has completely flipped that narrative in just 19 short games.

Dan Mullen was the man for this Gator job and he is proving it every Saturday, not too bad for the fallback guy.