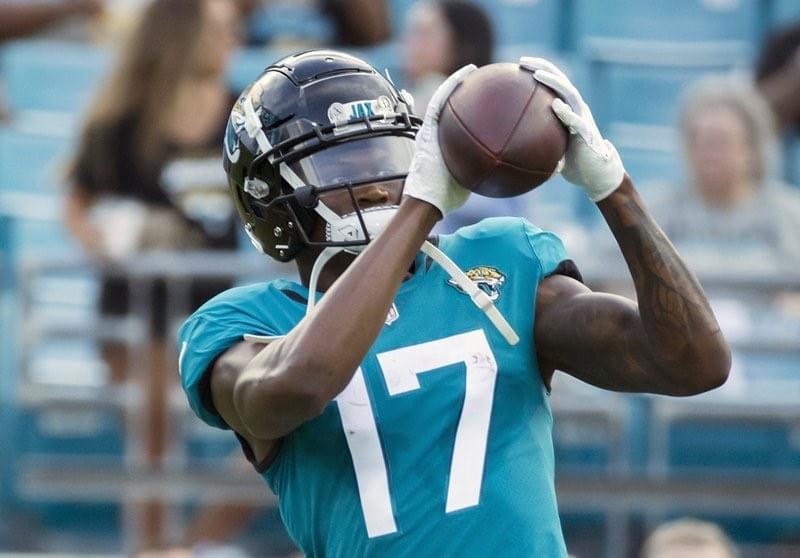 The same player who looked overmatched at times in the NFL as a receiver during his rookie season (174 yards and no scores) has more than found his stride.

He’s becoming one of the top players at his position in the league.

Chark was an overwhelming bright spot in Sunday’s 34-27 loss to the Panthers. He caught eight passes for 164 yards with two touchdowns from rookie quarterback Gardner Minshew.

“DJ has been incredible,” Jaguars defensive end Calais Campbell said. “He’s arguably the best receiver playing football right now. He’s up there. He’s made tough, contested catches. He gets it when its low. He runs after catch. He gets in the end zone. He’s having a phenomenal year. When Chark plays like that, we should win ball games.”

The Jaguars (2-3) leave Charlotte with plenty of problems to solve: turnovers, run defense and penalties top the list. However, the emergence of Chark has to make the Jaguars optimistic that they might have a legit No. 1 receiver.

Chark certainly looks the part with his size (6-4, 198 pounds) and speed (4.34 40 time at the combine). That athleticism was why the Jaguars selected him in the second round of the 2018 draft. He just turned 23 last month.

Chark made catches of 37, 31 and 31 yards on Sunday. His 37-yarder allowed the Jaguars to answer Carolina’s touchdown on the opening drive of the game. Chark also caught an 11-yard touchdown and had another grab for 20 yards.

“I trust him,” Minshew said. “I’m going to give him every opportunity to make plays.”

Chark is still a year away from what is considered THE year of a young receiver – the pivotal third season.

In addition to his yardage, Chark also leads the AFC with five touchdown catches and an average per catch (18 yards) among qualified receivers. He ranks fourth in the NFL in receiving yards and second in touchdowns.

“I saw the same thing I’ve seen all year,” Jaguars coach Doug Marrone said. “A guy that can make plays. He’s playing at a high confidence level. We’re getting a lot out of him. I’m very happy with him.”

Chark was asked in the locker room Sunday a familiar question during his media session: “Are you surprised by this?”

Chark started to answer before sixth-year receiver Marqise Lee spoke up from a distance behind Chark.

Chark laughed at Lee’s comment and then said he isn’t surprised. He also makes it clear he heard the doubters this offseason.

“I just come in and work,” Chark said. “I’ve got receivers around me that help me every day. These guys have never given up on me even last year when the outside had comments. The guys in this locker room never doubted me.”

A few minutes later, Chark was talking to veteran quarterback Nick Foles, the team’s starter prior to breaking his collarbone in the season opener on Sept. 8. Foles talked to Chark for a few minutes before patting him on the back.

Minshew has been sensational, but it does speak to Chark’s ability that he’s having this impact with a rookie quarterback. Imagine when this connection has a bit more seasoning in the NFL.

It’s too early to label Chark as Jimmy Smith’s long-lost successor. The Jaguars thought they had that in Allen Robinson. Robinson caught 80 passes for 1,400 yards and a franchise-record 14 touchdowns in 2015, his second season. Much of that was garbage time though and Robinson regressed his third year, was lost for the season in the 2017 opener and left in free agency.

Smith has the gold standard season for a receiver in Jaguars history. In 1999, Smith caught 116 passes for 1,636 yards and six touchdowns when he was 30 years old.

Smith will remain the Jaguars best receiver for years to come. His career numbers demand that.

But, it’s tremendous to have a young player that looks like he might be up to the chase.