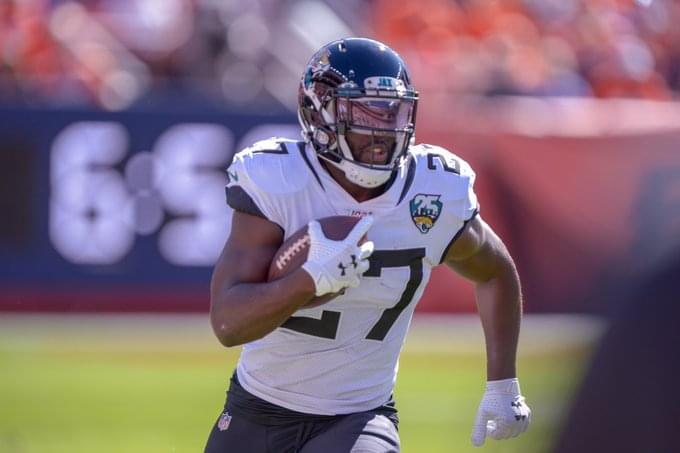 DENVER – This was pure euphoria.

The Jaguars trailed 17-3 in the second quarter and rallied for a walk-off 26-24 win over the Broncos at Mile High Stadium. Jaguars kicker Josh Lambo connected on a 33-yard field goal as time expired.

There were heroes galore in the Jaguars locker room in a win that completely changes the complexion of a still young season.

Two weeks ago, the Jaguars were 0-2, had placed their starting quarterback Nick Foles on injured reserve with a broken collarbone and saw their best player, cornerback Jalen Ramsey, demand to be traded.

The season was unravelling about as fast as a season can in this league drenched in parity.

Now, the Jaguars are 2-2, as is every team in the AFC South.

The stunning takeaway from Sunday was simple.

Finally, the Jaguars actually have an offensive nucleus.

“That was an incredible team win,” Minshew said. “Awesome experience with those guys, just celebrating. It shows our resilience as a team.”

Minshew was dazzling down the stretch, making plays few can in leading the Jaguars to two separate scoring drives that gave the Jaguars the lead in the second half.

Minshew Mania will grow in its phenomenon this week.

“He’s tougher than what you think. I don’t know if the mustache gives him power but he’s playing his part.”

Fournette is a main reason why the heights of Minshew Mania will rise higher.

“It’s a mentality,” Fournette said. “I knew coming in during the week preparing for the Broncos, just making one guy miss or not letting one guy tackle me. That’s my whole mentality.”

The Jaguars opened the second half with three consecutive runs with Fournette that gained 27 yards and pushed the Jaguars into Broncos territory.

The message was sent.

“We were getting back to what we’re good at, running the ball and it was effective,” Fournette said. “All of the guys put a body on a body.”

Fournette sparked a 16-play, 75-yard touchdown drive that burned 10:24 off the clock. Minshew finished the drive with one of the most brilliant escape acts I’ve ever seen. He eluded four defenders in the pocket before finding rookie running back Ryquell Armstead in the end zone for a 7-yard touchdown.

“Gardner is spinning around,” Jaguars coach Doug Marrone said. “He’s breaking tackles. It’s like when you’re 12 playing in the street with a bunch of guys. He’s just trying to make a play. The guy made plays.”

The body blows to Denver’s defense had been landed.

After the Jaguars defense forced a three-and-out, the Jaguars had the ball again at their own 7.

It was Fournette Time.

He raced through the middle of the line before breaking through tackles in the secondary on his way to an 81-yard run to the Denver 12.

“It was going to come,” Fournette said. “The line told me to just keep pushing. They were telling me that while we were getting four or five yards a carry.”

Minshew then showed some savvy, getting the Jaguars into the end zone. On second-and-16 from the Denver 18, he faked left and then faked right before finding tight end James O’Shaughnessy open in the middle of the field for the touchdown to give the Jaguars a 20-17 lead with 1:10 left in the third quarter.

A 34-yard Lambo field goal extended the lead to 23-17 with 2:54 left in the fourth quarter. Denver was down to one timeout.

The rookie sixth-round quarterback would have to deliver more magic.

Minshew completed a 32-yard pass to Westbrook to the Denver 27 on a beautiful deep throw towards the sideline.

“Dede ran an awesome route to really set it up,” Minshew said. “Just one of the big, big plays we had in the second half.”

Marrone showed his substantial confidence in Minshew, letting him throw it again with the Jaguars in Lambo’s range.

Minshew fired a pass to receiver Chris Conley for a 17-yard gain to the Broncos 10.

He made sure Jaguars star defensive end Calais Campbell, a Denver native, would have a winning homecoming.

“He never surprises me,” Campbell said. “He is one of those guys where you know he can do everything. He has great instincts and is very magical.”

The Jaguars moved back on a holding penalty on center Brandon Linder but were plenty close for Lambo to provide the game’s final heroics.

The Jaguars sideline erupted as the kick went through the uprights.

This is one we’ll remember for a long time.

For now, the Jaguars enter the season’s second quarter having survived an 0-2 start with a clean slate. They look up to no one in the AFC South.

The Jaguars also enter the next portion of the season with perhaps something they haven’t had since the glory days of the late 1990s.

An offensive nucleus filled with emerging talent, promise and toughness.