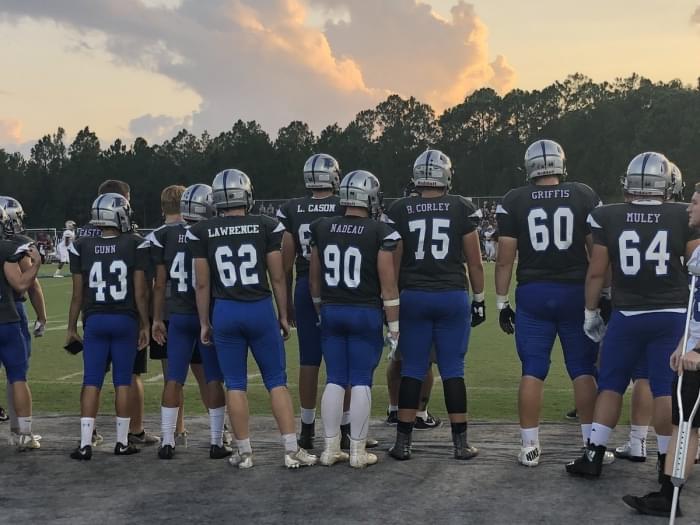 It’s hard to believe the halfway point of the 2019 high school football season is on the horizon. There have been some surprise teams in 2019 and there have been teams who have underachieved.

Here is a look at the 1010XL Top Five teams in the area through four weeks of the high school football season.

Whenever you beat Duval County public school powers Lee and Mandarin by a combined 53 points, that tells you all you need to know about how good Bartram Trail has been. Add to that wins over Creekside and Brunswick and the 4-0 Bears are beating teams who are a combined 8-5 on the season with four of those five losses courtesy of Bartram Trail.

The Columbia Tigers are once again proving that they are a force to be reckoned with. Columbia already has wins over Trinity Christian and Oakleaf in the Northeast Florida area and they look poised for another deep playoff run. Its game against Lee in mid-October will be for a district title.

The Saints survived a close test against Terry Parker in their opener, but since then they have had an easy time with both Fletcher and Nease. Sandalwood quarterback Jeff Sims has shown people why he is a Florida State commitment early on this season. Sims, has been one of the best playmakers in the area so far in 2019.

Oakleaf’s three victories this year over Orange Park, Ridgeview and Gainesville have come by a combined 81 points and the only blemish on their record was a hard fought 21-19 loss to Lake City Columbia, one of the best teams in the state. That Oakleaf still has not opened up district play is interesting as it still has to get by Mandarin, Sandalwood and Bartram Trail which will not be easy.

How about a little love for the Golden Eagles who got a huge district win over Fletcher last Friday. With that win, Fleming Island is clearly in the 2-7A district race moving forward and is very quietly having one of the better early starts to the 2019 season in Northeast Florida. Oakleaf gets a lot of the attention in Clay County, but keep an eye on Fleming moving forward.

Ponte Vedra (3-0) Many wondered what life would be like after head coach Matt Toblin left for the Bolles job, a 3-0 start answers that question.

Mandarin (2-1) The defending 8A state champions are still very good, but a 32-7 loss to Bartram Trail was eye opening.

Creekside (3-1) Only loss came to Bartram Trail. They have a big one this Friday night against Bolles.