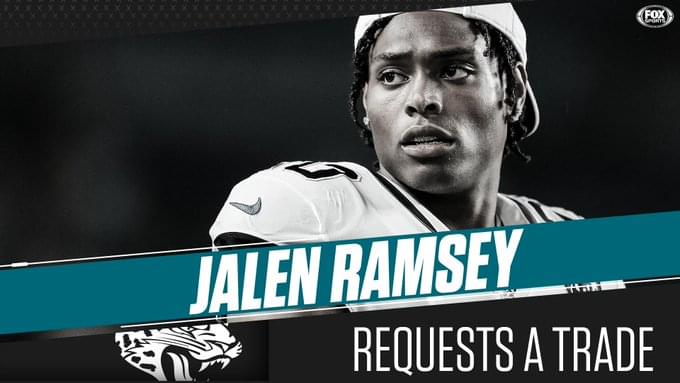 The Jaguars have gone from a Super Bowl contender to Team Timebomb in a season.

The captain of Team Timebomb is cornerback Jalen Ramsey. And yes, unfortunately, he has loyal followers in this locker room.

In perhaps the most farcical press conference in NFL history on Tuesday, Ramsey made it clear he wants to be traded although he didn’t have the guts to stay that. He ducked the majority of the questions asked in the 16 minutes none of us will ever have back.

Reports surfaced Monday night that Ramsey wanted to be traded, a day after the Jaguars dropped to 0-2 after Sunday’s loss in Houston. The Jaguars called a Ramsey press conference late Tuesday morning, announcing he would speak at 11:40 a.m. and then pushing it back to 12:40 p.m.

It will always be a mystery as to why the Jaguars gave him the platform.

Not once did Ramsey say he wants to be a Jaguar.

Not once did Ramsey say he hopes he isn’t traded.

He wasn’t even wearing Jaguars gear.

Instead, Ramsey said he wanted to talk to reporters to keep from creating a distraction.

Are you serious? Could you be further from reality?

The Tennessee Titans play here Thursday night in a game the Jaguars have to win to start to build some momentum.

Predicting what Ramsey will do is a near impossible task. Still, I thought Ramsey might be somewhat pensive and apologetic because I was surprised the Jaguars would conduct a press conference for him.

Why do that for a player who wants out?

Maybe the 24-year-old Ramsey realized he had crossed a line with his childish behavior Sunday when he became enraged that Jaguars coach Doug Marrone didn’t challenge a 3-yard catch by Texans receiver DeAndre Hopkins in the first quarter.

Instead, Ramsey embarrassed the franchise with his profanity-laced, disillusioned statements.

He might have hurt the Jaguars ability to get quality compensation for him. Any interested decision maker on the other 31 teams that saw that debacle has to sense desperation. A desperate team might take less to make the deal.

That decision maker also has to defend the trade to his owner. Watching Ramsey had to at least make interested parties wonder if they’ll be able to manage him. That limits the kind of treasure trove they can offer because the risk goes up.

The captain of Team Timebomb was joined at his joke of a press conference by linebacker Myles Jack and safety Josh Robinson. I would cut Robinson today for walking into the room.

The TV studio at TIAA Bank Field where Ramsey’s press conference was conducted is nowhere near the locker room. A player has to go out of his way to get in there.

Yet there was Jack and Robinson showing their support for the captain of Team Timebomb. Jack, a player the Jaguars just gave $33 million in guaranteed money to in an extension, was in there showing his support for a guy who has dropped a nuclear bomb on this franchise in Week 3.

This is a mutiny, led by Ramsey.

His utter disdain for Marrone is evident.

Yet, the Jaguars seem at ease with letting the captain of Team Timebomb continue to influence others. Ramsey practiced Tuesday after the press conference. Amazingly, the Jaguars are planning on letting him play on Thursday.

I was hopeful Ramsey could remain a Jaguar. He’s brilliant and a joy to watch play.

Not anymore. Not after witnessing that.

Ramsey has a clear agenda to be traded.

The Jaguars should deactivate him and grant his wish.

He should never wear the Jaguars logo again.

The rebuild has begun.