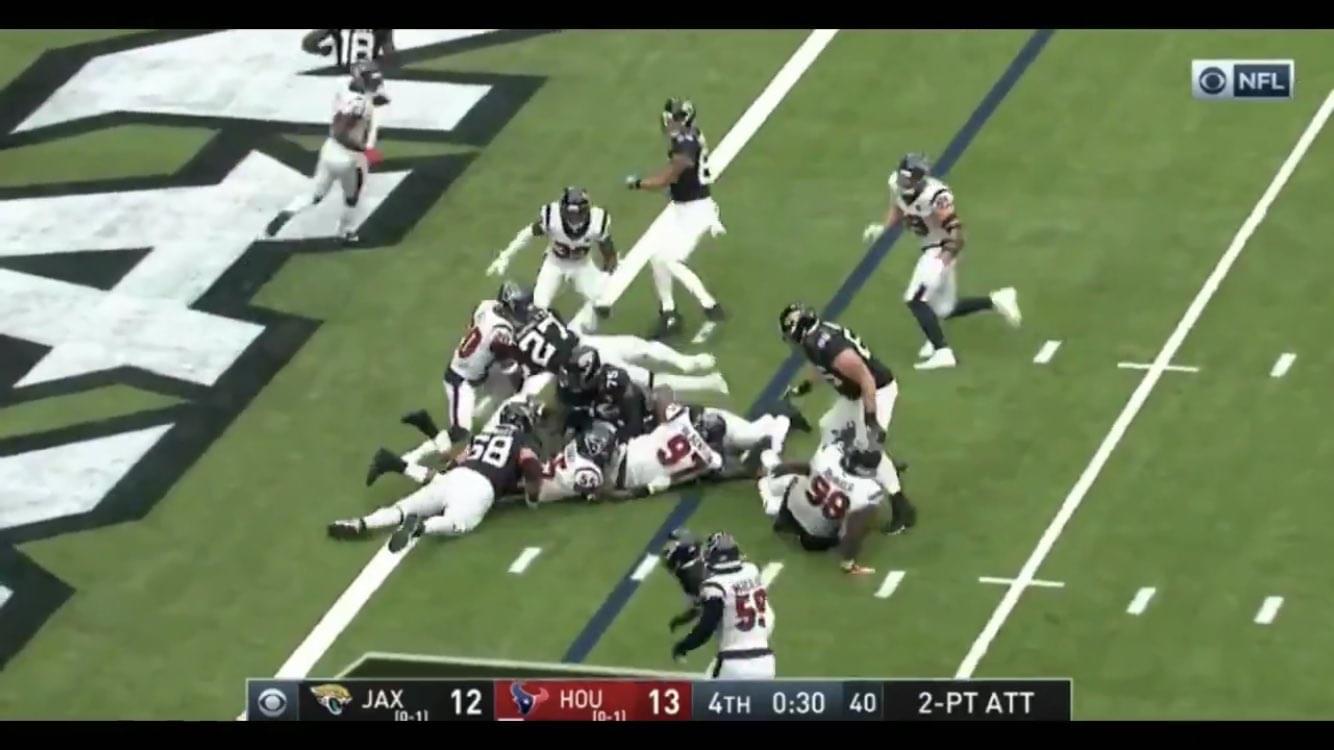 HOUSTON – Going for two was the right decision.

The Jaguars play another game in four days when Tennessee comes to TIAA Bank Field on Thursday night.

The last thing Jaguars coach Doug Marrone needs is an overtime game that could put another dozen snaps on his fatigued players. The attrition is already concerning two games into the season.

After Jaguars rookie quarterback Gardner Minshew found receiver DJ Chark in the end zone for a 4-yard touchdown to make it a 13-12 game with 30 seconds left, I was surprised, but agreed with going for two.

The play call was the wrong decision.

It simply can’t be defended.

There was no evidence running back Leonard Fournette was going to get the yardage needed to convert.

Fournette’s previous six carries had gone for the following amounts: zero, 4, minus-1, zero, two and two.

Minshew handed the ball to Fournette and the line instantly caved. Right guard A.J. Cann and center Brandon Linder were knocked to the ground at the line of scrimmage. Fournette was instantly hit at the line but was able to turn his body and dive towards the goal line. Houston safety Justin Reid stopped him inches short.

In a time of unmatched offensive creativity in the NFL, Marrone elected to run up the middle. He even had time to think about the call, so I can’t put much blame on offensive coordinator John DeFilippo. Houston coach Bill O’Brien used a timeout when he saw the Jaguars line up to go for two. That made this a Marrone play call.

Yes, Minshew is a rookie in his first start but he had incredible momentum. He drove the Jaguars 61 and 68 yards on his last two possessions resulting in a field goal and touchdown that rescued the Jaguars from a 13-3 hole.

There was no indication he wasn’t ready to handle throwing in the 2-point situation. He had also shown the ability to make big gains running. Minshew ran for 56 yards on six carries. He actually outgained Fournette (47 yards) on the ground.

Calling a pass play would’ve brought Minshew’s running ability into play as well. He had runs of 18 and 4 yards before throwing the touchdown to Chark, a play in which he extended with his mobility.

Marrone is now 2-12 in his last 14 games. That’s a lot of stench that is starting to overcome the sweet smell of the joyous 2017 AFC Championship Game run.

The unit Marrone should have the most influence on from his coaching background (the offensive line) is atrocious. They routinely get overwhelmed and commit far too many penalties. They had six on Sunday.

Marrone got into a heated exchange on the sideline with cornerback Jalen Ramsey on Sunday that can be easily dismissed with a win, but looms after a loss.

The Jaguars can keep their season afloat by beating Tennessee on Thursday. An 0-3 start would signal doom.

The Jaguars looked doomed here before getting some magic from their sizzling rookie quarterback.

It’s too bad the head coach threw a bucket of cold water on it.

Marrone had time to think about the call and ran it up the middle with a far-from-special back behind a weak line. His bold aggressiveness was done in by a conservative call.