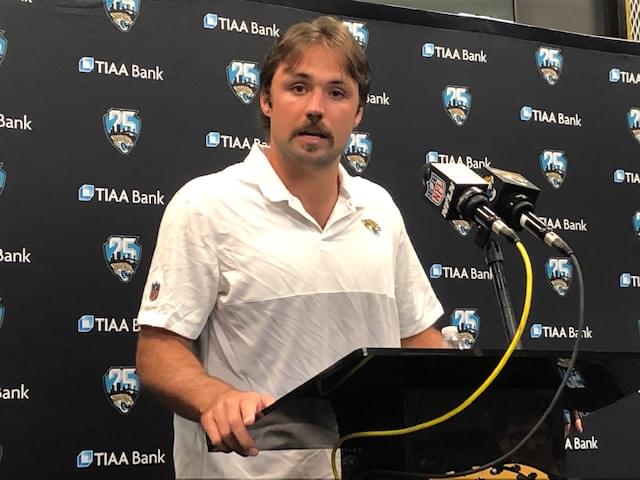 The Jaguars deserve it.

The Jaguars fans absolutely deserve it.

We deserve Gardner Minshew to be good.

The Football Gods owe us.

Think about the last three years and the devastation Week 1 has caused to the Jaguars.

2017 – Receiver Allen Robinson tears his ACL and is lost for the year.

On Sunday, the Week 1 misfortune continued with Nick Foles breaking his collarbone in a disheartening 40-26 loss at home to Kansas City.

Marrone has been the Jaguars coach for three seasons and has lost a massive part of his offense in the opener every year.

That doesn’t include other key injuries like last season when the Jaguars lost receiver Marqise Lee for the year in the preseason and saw left tackle Cam Robinson go down for the season in Week 2 with a knee injury.

The Jaguars will need Minshew to be good against the Texans.

Their last hope for a successful season comes down to this sixth-round rookie.

He’s undersized. His arm is average.

However, the Jaguars believe there’s something special in there.

Minshew stepped in for the injured Foles and completed 22 of 25 passes for 275 yards with two touchdowns and an interception for a passer rating of 122.5. Minshew’s 88-percent completion percentage set a franchise record for passers with at least 25 attempts.

He led the Jaguars to scores on four of seven possessions.

Marrone was asked Wednesday about Minshew’s ability to take information from the coaches and quickly execute it on the field.

“It’s a gift,” Marrone said. “I really believe that. Some people have that and some people don’t. I think some things are just God given. It’s the same way someone could run a 4.3 [second] 40 [yard dash]. How does he do it and someone else can’t? I think it’s just a gift. Some people are naturals.”
On Monday, I asked Marrone about his assessment of first-year offensive coordinator John DeFilippo’s performance against the Chiefs. Getting that kind of production from a rookie backup has to be a credit to him, right?

“It goes back to Gardner,” Marrone said. “So, what happens is you have this plan, but this plan’s set for Nick. Minshew is studying it and then all of a sudden, you go through this switch. Now all of the sudden, you’re like, ‘Ok, what do you like that’s in this game plan?’ Gardner was like, ‘I like this, I like this, I like this.’ He knew in his mind, so credit to him being ready to go. When you prepare like he did and you have a change to go out there and execute, it just shows you the type of guy he is.”

Minshew was asked about his ability to take coaching and apply it at an accelerated rate on Wednesday.

“I think part of it is being raised right,” Minshew said. “You have parents and when they tell you to do something, you do it. So anytime somebody tells me to do something from an authority position, I’m going to do it to the best of my ability. So, I think more than anything it’s just a respect for the coaches and a commitment to the craft.”

I’m not expecting much in Houston on Sunday.

But we all deserve for Minshew to be good.