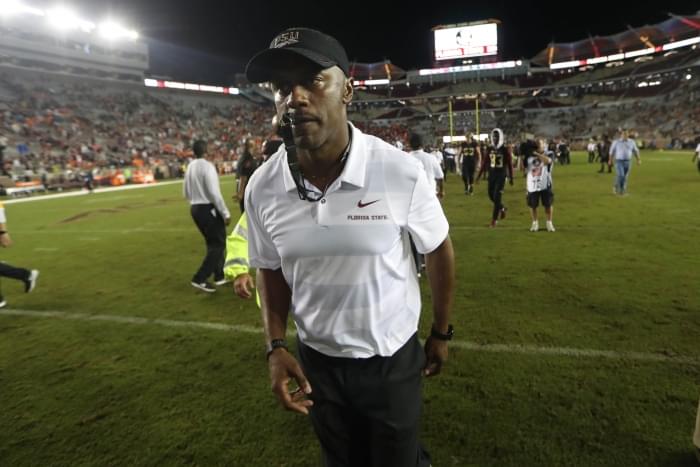 The screams coming from Seminoles are getting louder and louder. How much longer can FSU’s administration tolerate its second-year coach?

Reportedly, it would cost the school too much money – some reports say as much as $20 million – to fire Taggart. But as the unrest grows and the booster contributions shrink, when is enough enough?

Arguing that 13 games isn’t enough time to judge a coach is often true, but it’s worth considering in Taggart’s case. He seems lost, confused, as the once proud Seminoles have become a laughingstock among the elite group they once belonged to.

Losing at home to Boise State and needing a missed PAT in overtime to secure a home victory over Louisiana-Monroe has left Seminoles embarrassed, dazed and madder than hell.

Yes, Taggart is a great guy. Remember the Jaguars hanging on to Gus Bradley? How’d that work out?

Know when to cut your losses. Know when to get off a losing horse. They’re clichés but they’re also good advice.

How to pay players

Once toe meets leather, the bands begin playing and coaches start acting like their doing medical research, we tend the worry about the outcome of games and little else.

Major issues are pushed aside. Yes, Scarlett, tomorrow is another day.

But those issues don’t go away. In fact, they grow as crowds get bigger and coaches’ salaries escalate.
For example, there’s still the issue of whether or not the players deserve a piece of the financial pie.

I can – and have – argued both sides.

The players get a lot: an education, the finest instruction, the best equipment and care and a giant marketing machine that benefits those who are talented enough to go pro.

Still, in a multi-million-dollar business, is that enough? Many argue no.

Maybe not a great plan, but a start.