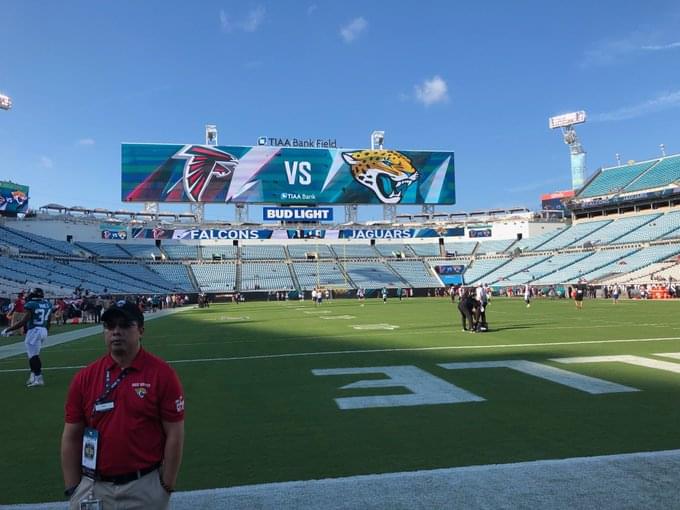 The Jaguars stunning lack of depth has been greatly exposed this preseason. Coach Doug Marrone elected to only play the starters for a portion of the third preseason game.

The results were ugly with the reserves being asked to shoulder so much of the workload. The Jaguars lost all four games and were outscored 106-29.

The Jaguars lost in the preseason finale to Atlanta 31-12 Thursday night.

The roster now has to be cut from 90 to 53 men on Saturday, although it’s fair to ask if 53 men have really earned it.

The Jaguars front office will have to utilize the waiver wire on Sunday. The Jaguars need immediate help at tight end, offensive tackle, linebacker and safety. An argument can be made for other positions as well.

The Jaguars are seventh in the waiver-wire order, reflected off this year’s draft order. If six teams pass on an available player, the Jaguars can claim him and cut a player.

I expect the Jaguars to be active, but first the roster must be cut to 53.

Holding my nose, here’s my best guess at which players have “won” the final spots. At least for a day.

The formula most NFL teams use is 25 players on offense and defense with the three specialists. We’ll stick with that.

Who: Nick Foles and Gardner Minshew.

Why: Has Minshew done enough to be the backup? Probably, because the sixth-round rookie had such poor support around him. Minshew didn’t show much improvement over the last month. He finished the preseason completing 54-of-96 passes for 468 yards with no touchdowns or interceptions.

I’ll be fascinated to see if Jaguars personnel chief Tom Coughlin, general manager Dave Caldwell and coach Doug Marrone will be comfortable with a shaky rookie being one Foles injury away from playing in such a critical year for the trio.

The Jaguars will probably think about adding a veteran backup, but will likely hope Foles stays healthy and Minshew isn’t needed for the rest of the season while he develops.

Why: The depth isn’t great and this could be a position that gets a waiver-wire upgrade, which would likely doom Rawls.

Why: I’ll say Pryor makes it despite battling a hamstring injury for a majority of the preseason. He was impressive prior to getting hurt. (Editor’s note: reports Friday indicate that Terrelle Pryor has been cut)

Why: The Jaguars keep four here without a fullback. I’ll say Koyack holds off undrafted rookie Charles Jones, but he’ll have an anxious weekend as the waiver-wire claims unfold.

Why: Richardson was the breakout story of training camp, but I’ll say his push to unseat Cann falls just short. Wells and Ogbuehi are left and right tackles, respectively. I’ll believe this group cuts Wells when I see it. They’ve been amazingly devoted to him for five years. (Editor’s note: Reports Friday indicate Josh Wells will be cut)

Why: This is the strength of the roster by a large margin. Cutting tackle Eli Ankou was the hardest decision for me.

Why: I would take Ryan off PUP even if he won’t be ready until the fourth game. This position should absolutely be helped by the waiver wire, which would mean the end for Alexander. If Ryan will stay on PUP and be out the first six games, I would bring in two new linebackers off waivers.

Why: There’s no drama here among the first four. I’ll take Borders as the fifth.

Why: There should be a minimum of one waiver-wire addition here on Sunday. I’ll say Robinson makes it Saturday and then is gone on Sunday.

Why: These three positions are set.