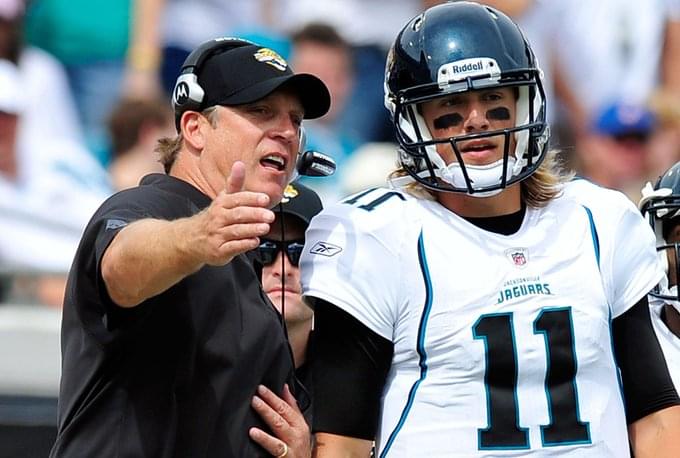 “It’s an upgrade in that you’re hoping Nick comes in and protects the football better,” Del Rio said. “That was Blake’s (Bortles) biggest problem, he just turned the football over to often.

“There were always stories coming out of there about the way he prepared, or didn’t prepare. The way he took care of himself, or didn’t take care of himself. So, you kind of put that aside and realize that they have to play great defense and hopefully they can get back to doing that. They also need to be able to run the ball and have that big tailback do his thing.

“To me, they need to run the ball, play good defense and let Nick Foles do his thing. Not have him carry the team, but just have him come on and be a part of the team. That’s what he did so well in Philadelphia.”

Del Rio talked about what it means to have a quarterback who can take care of the football.

“You want a guy that can convert on third-downs, but you also have to take care of the football,” Del Rio said. “No matter who you are, or what you’re doing, the number one factor of wins and losses in the NFL is if you’re turning the ball over and if you have a quarterback that’s your trigger man that turns it over a lot, you’re in trouble.”

Del Rio coached nine seasons in Jacksonville from 2003-2011. In that time he compiled a record of 68-71 with two postseason appearances.

Del Rio was fired with five games remaining in the 2011 season and was asked about his time in Jacksonville.

“It didn’t end the way I would have liked to see it end,” Del Rio said. “I had a great time there. I had basically nine years of my life there. I raised my family there and I enjoyed the community. A lot of my good friends remain there and I get back to Jacksonville a couple times a year. So, I have some fond memories.

“We accomplished some great things, but came up a little short against New England. We are not the first team to get knocked off by them, but they knocked us out of the playoffs those two times we were there and that was too bad.

“Other than not winning as much as I would have liked to, I really enjoyed my time in Jacksonville and I really appreciated the heck out of Mr. (Wayne) Weaver giving me the opportunity to be a head coach.”

It’s no secret that during Del Rio’s time in Jacksonville, there were questionable moves by the front office regarding player personal.

From the drafting of quarterback Blaine Gabbert, to trading up and drafting defensive end Derrick Harvey, both of which were huge busts. Del Rio was asked about those decisions.

“I’ve always considered myself strong in personal, but I’ve never had the strength to make personal decisions,” Del Rio said. “I’ve never been offered that opportunity. So, I would just say there were some things that I would have done differently, but I don’t like going back and being negative. I appreciate the time and the opportunity, but if I’m going to be honest, there were things I would have done differently at each of my stops.

“To me you do the best you can with the opportunities you get and I’m certainly proud of that. In both cases when I was replaced it didn’t go very well the following year in Jacksonville, or Oakland. I think that is a testament to the staff that we had and that was some validity to the way we were doing things.”

Del Rio recently signed with ESPN to be an NFL analyst and you will see him throughout the football season on a variety of ESPN outlets.