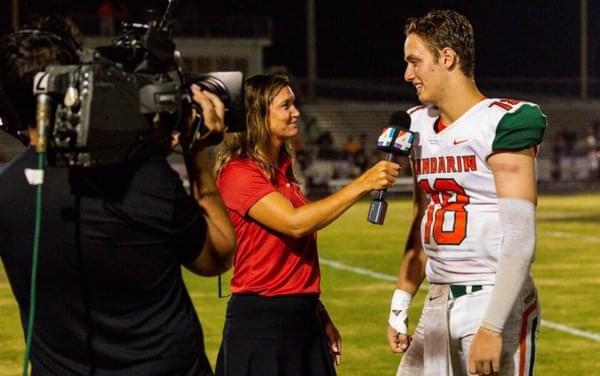 How do you follow up winning the Mr. Football award in the state of Florida and leading your high school football team to its first state title in school history? You try to do it all over again.

That is the mission for Mandarin quarterback and Georgia commit Carson Beck as he is back for his senior season. 1010XL sat down with Beck at the Baker Sports High School Media Day to reflect on what his off-season has been like since winning that state title back in December.

“It’s been pretty crazy, but it has definitely been a lot of fun,” Beck told 1010XL. “The craziest part was definitely that month right after the state championship game, just because I feel like no one really expected us to win.

Beck transferred to Mandarin from Providence prior to his junior season and he was asked in his wildest dreams, if he ever imagined how last season would turn out.

Now the big question for Beck and the Mustangs is how do you put last season behind and focus on the new mission in 2019?

“Truly, I just have to bring it myself,” Beck said. “I feel like a lot of people look up to me and I don’t say that in a cocky way, but I’m the quarterback and people naturally gravitate towards the quarterback. You’re the guy in the huddle calling the play and making the adjustment, so if I bring the energy myself, I feel like that will bring everybody else up and help the team be better.”

Beck is joined by Sandalwood quarterback Jeff Sims as two quarterbacks in the area who have committed to high profile power-five schools, Beck to Georgia and Sims to Florida State.

Beck was asked about his relationship with Sims and going through the recruiting process together.

“I feel like although we are at rival district high schools, we are still there for each other and we still pat each other on the back and congratulate each other on our accomplishments,” Beck said. “It has definitely helped to have someone else that has gone through the same exact thing that I’ve gone through and it’s definitely cool to see that two guys are going to big power-five schools from the same city.”

Finally, Beck committed to Georgia back on March 3 of this year and the simple question was asked to Beck: why Georgia?

Beck and Mandarin will kick off their 2019 season on Saturday August 24 taking on Atlantic Coast at 4:00 P.M. as part of the Publix Bold City Showcase. That game can be heard on 1010XL.