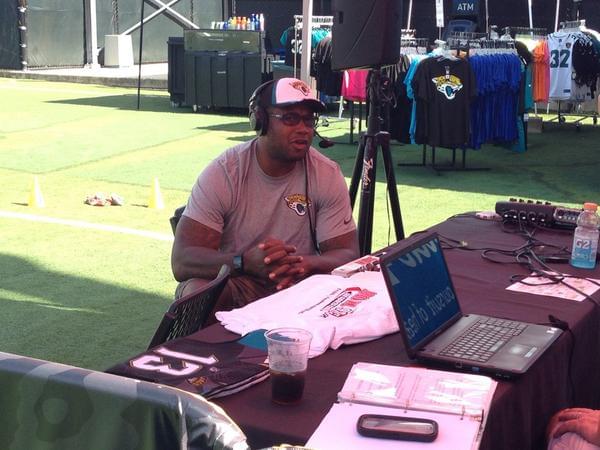 The Jacksonville Jaguars enter their 25th year as an NFL franchise and with that “XL Primetime” is going down memory lane with some of the greats from the past 25 seasons. Marcus Stroud played seven seasons for the Jags from 2001-2007. In that time he compiled 22 quarterback sacks and over 250 tackles.

Many Jaguar fans will tell you that Stroud is still one of the best defensive lineman to ever wear a Jaguars uniform.

“I had a great time playing in Jacksonville,” Stroud told 1010XL. “Believe it or not, my fondest memories of being a Jaguar aren’t on the field, but mostly in the locker room with the guys. That was a big part of my time there, having fun with those guys that I was able to play with.”

When you say the name “Marcus Stroud,” fans also think of fellow defensive tackle John Henderson and middle linebacker Mike Peterson. Those three made up on of the best defensive trios the Jaguars have ever had.

“We used to call it the ‘triangle,’” Stroud said. “We played good defense within that triangle and rallied to the ball and that’s how we were able to be so successful.”

In the early- to mid-2000’s, the Jaguars defense was known for being a tough, hard-hitting group. Stroud was asked what it was like to play on such a physical defense.

“One thing I would have to give coach (Jack) Del Rio for was he allowed us to kind of have that defensive identity,” Stroud said. “He was a part of that identity because he was a defensive guy and he preached that a lot.

“He and coach Mike Smith did a good job in helping us develop that identity and once we developed it we ran with it.”

Stroud still keeps up with the current team and is excited about what new starting quarterback Nick Foles brings to the table.

“I think Nick Foles is a winner, he is a proven winner,” Stroud said. “Foles is a guy who loves his security blanket which is his tight end and if you get a tight end that is more than serviceable than we have a good chance of winning the AFC South this year.”

Before Stroud was drafted by the Jaguars in the first-round of the 2001 NFL Draft, he starred along the defensive line at the University of Georgia. Stroud was asked to give his opinion on what head coach Kirby Smart has accomplished at Georgia in his first three years on the job.

“Let’s be realistic, nobody cares who wins the conference anymore, it’s all about making it to the college football playoff and he has done that,” Stroud said. “In this era he has done what he was supposed to do and that is get us to the College Football Playoff.

“He has also gotten us to the SEC Championship Game two years in a row, so what more can you ask for? You definitely want to win it, but as hard as college football is now, just to get there is an accomplishment.

“I’m not saying that Georgia wants a participation award, but I definitely think we are heading in the right direction especially with the talent we have this year.”

Finally, a lot has been made from the Georgia side about moving the Florida-Georgia game out of Jacksonville once the current contract with the city runs out following the 2021 season. Stroud was asked about this.

“I have two takes on it, as a former player, I wouldn’t mind for Florida to have to come up between the hedges and us having to go down to Ben Hill,” he said. “As a fan, I say absolutely not, leave the World’s Largest Outdoor Cocktail Party in Jacksonville.”