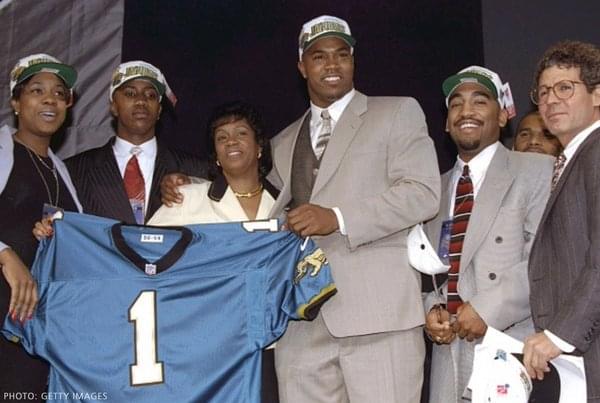 The Jacksonville Jaguars are entering their 25th year and with that “XL Primetime” on 1010XL is going down memory lane with the greats from the past 25 seasons.

Kevin Hardy was the second-overall pick in the 1996 NFL Draft. During his six years in Jacksonville, Hardy recorded over 500 combined tackles and had 28.5 sacks which puts him in the top-five all time in a Jaguar uniform.

“Ironically, out of the top-five teams in the draft that year, Jacksonville is the only one that did not bring me in for a visit, but I was excited to come to the NFL and come to Jacksonville and I did feel that I would be able to help out the defense and help out the franchise.”

Hardy was joined by Tony Brackens and Aaron Beasley in the 1996 draft class for the Jaguars and to this day that trio may still be the best trio in one single draft in franchise history.

“Right off the bat Brackens and I developed a pretty strong bond right from rookie camp,” Hardy said. “We were roommates and two defensive guys with similar families and similar backgrounds. So it was special from the start.

“When you add Beasley in the mix, we developed a really good friendship off the field and I think that is what helped us perform well on the field. It was real, it was genuine and you knew you were coming to work with guys that you enjoyed working with.

“I think that relationship helped us become the players that we become because it was almost like we wanted to play for one another and you wanted to do well and not let your brother down.”

The Jaguars had great success for much of Hardy’s time in Jacksonville and he gave credit to the front office for putting together a winning team and culture.

“It was a real testament to Couch (Tom) Coughlin and the whole scouting staff that they had at the time,” Hardy said. “I may be a little biased because I was part of it, but that team was loaded with talent on both sides of the football.

“One of our biggest assets as a defense at that time was our offensive unit. Those guys along the offensive line and then along with Jimmy (Smith), Keenan (McCardell), Mark Brunell, Natrone Means and Fred Taylor, we came on the field in a lot of games already being up the first time we get on the field.

“If you know anything about football, playing with a lead is a lot easier than playing from behind. So, we came on the field and our coordinators were able to do so much more because we were in a better situation. We also knew our offense could put up points at any time and that really helped us and we were able to feed off of that. As a result it just made for a tremendous football team.”

To this day many Jaguar fans will still tell you that Kevin Hardy is one of, if not the best, linebacker to ever play for the Jaguars.

Hardy was asked what it’s like to still be recognized in that fashion over two decades after his arrival.

“It’s special because when you really look back and you look at the work that you put in to achieve that level, it just makes everything worth it,” Hardy said. “I really enjoy going around and running into true fans who bring up the memories because it makes you feel like people were really on your side and they really cared about you.