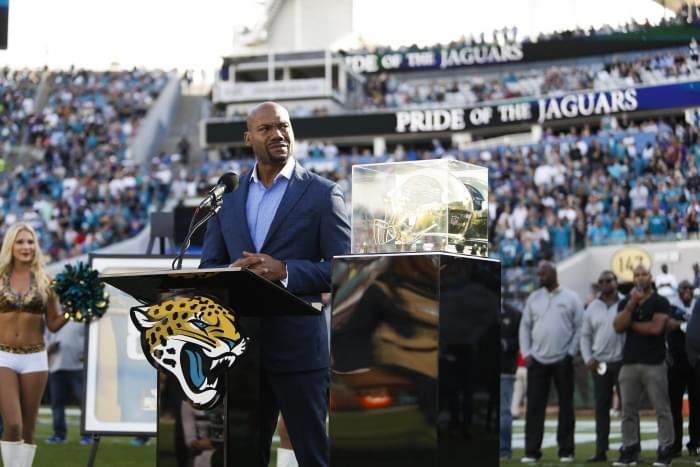 “History shows that (Tom) Coughlin has always done a real good job as far as evaluating players and there is no doubt in my mind that he and Dave Caldwell are going to do a good job in signing free agents and getting the talent in there,” Smith said.

Smith was asked about the wide receiving corps’ struggles last season and how those struggles can be remedied.

“I think the whole offense struggled and not just the receiving corps,” Smith said. “We had some injuries that played into us not doing so well on offense. I think with Nick Foles and our new offensive coordinator and them having some history, we have some talent at receiver, it just needs to be developed.

“The defense has been solid over the past two, to three years, but we have just struggled on offense. I think we have new life in the bank with Nick Foles and we are going to put some points on the board.”

“It seems like he had a sit down with Coach Coughlin at some point during this off-season,” Smith said. “I really like the way that Fournette has responded and that’s what leadership is all about and this team on the offensive side of the ball really needs that leadership and I think Fournette can be that leader that the offense needs.”

The biggest story surrounding the Jaguars presently is the announcement from linebacker Telvin Smith that he plans on skipping the 2019 season. Jimmy Smith addressed that situation.

“I’ve been following the story and it surprised me like it surprised the whole Jaguar nation,” Smith said. “I tend to worry about him more than be angry at him. This is one of those situations when you put football aside and you sit down and talk with him to see what is going on in his life.”

“Like he mentioned, football isn’t everything, and you have certain fans that love him to death and are willing to be patient with him and see what is going on with his life.

“Football is always second. Yeah, we are going to miss him as a talent on the field and as a leader on the defense, but I tend to worry about him and I hope they can talk with him and see about fixing some things to get him back on the football field.”

Finally, Smith was asked about 25 years of Jacksonville Jaguars football and his lasting memory as a Jaguar player.

“The big catch that I made in Denver is probably my most precious memory of being with the Jaguars,” Smith said. “I’m glad to have that catch because that catch got us to the next round. We weren’t favored to beat Buffalo or Denver, but we did good that year in the playoffs.”